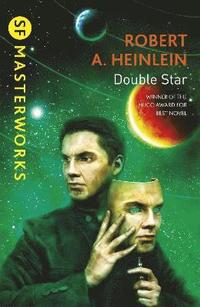 av Robert A Heinlein
Häftad Engelska, 2013-09-12
109
Köp
Spara som favorit
Skickas inom 7-10 vardagar.
Fri frakt inom Sverige över 159 kr för privatpersoner.
Finns även som
Visa alla 4 format & utgåvor
One minute, down-and-out actor Lorenzo Smythe was - as usual - in a bar, drinking away his troubles as he watched his career go down the tubes. Then a space pilot bought him a drink, and the next thing Smythe knew, he was shanghaied to Mars. Suddenly he found himself agreeing to the most difficult role of his career: impersonating an important politician who had been kidnapped. Peace with the Martians was at stake - failure to pull off the act could result in interplanetary war. And Smythe's own life was on the line - for if he wasn't assassinated, there was always the possibility that he might be trapped in his new role forever!
Visa hela texten

Robert Anson Heinlein was born in Missouri in 1907. He graduated from the US Naval Academy at Annapolis in 1929, serving as an officer until his discharge, for medical reasons, in 1934. In 1939 he turned to writing to supplement his Naval pension, selling his first story to John W. Campbell's ASTOUNDING magazine. He would go on to have a profound influence on ASTOUNDING, dominating the Golden Age of science fiction and shaping American science fiction for decades to come. He won multiple HUGOs, an unprecedented six PROMETHEUS AWARDs for libertarian science fiction and was the Science Fiction Writers of America's first GRAND MASTER AWARD recipient. A deeply political writer, Heinlein is most closely associated with right-wing libertarianism, although STARSHIP TROOPERS brought with it accusations of fascism and STRANGER IN A STRANGE LAND is credited with being an influential text for the free love movement of the 1960s. Acclaimed as one of the 'Big Three', alongside Arthur C. Clarke and Isaac Asimov, he was a giant of 20th-century science fiction. Robert A. Heinlein died in 1988.