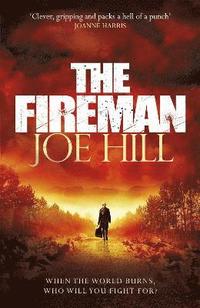 av Joe Hill
(1 röst)  |  Läs 1 recension
Häftad Engelska, 2017-05-04
249
Köp
Spara som favorit
Nobody knew where the virus came from. FOX News said it had been set loose by ISIS, using spores that had been invented by the Russians in the 1980s. MSNBC said sources indicated it might've been created by engineers at Halliburton and stolen by culty Christian types fixated on the Book of Revelation. CNN reported both sides. And while every TV station debated the cause, the world burnt. Pregnant school nurse, HARPER GRAYSON, has seen lots of people burn on TV, but the first person she saw burn for real was in the playground behind her school. But when she realises she has become infected, she is determined to find a way to survive - at least long enough to see her child born. No matter what is left of the world for them to live in. With the epic scope of THE PASSAGE and the emotional impact of THE ROAD, this is one woman's story of survival at the end of the world.
Visa hela texten

If you haven't yet grabbed a copy of Joe Hill's THE FIREMAN, you need to. Original and gripping, a page-turner * George R.R.Martin * I devoured this book as if the pages themselves were on fire...an end of the world tale with a blazing heart of hope at its core. A contender for book of the year * Sarah Pinborough, author of 13 MINUTES * Joe Hill really could set the world on fire with this book: cleverly imagined and a compulsive read * Katherine Cowdrey, The Bookseller * Joe Hill has always been good, but he's created something incandescent here, soaring and original. He's a master storyteller who writes with fire in his veins * Lauren Beukes, author of Broken Monsters * 'Very well-drawn characters, some serious shocks, a great sense of humour and a willingness to break hearts as well as raise pulse rates.' * SciFiNow * I would put money on this being huge. Can't put it down * Sam Baker, The Pool * You'll be instantly hooked if you're obsessed with The Walking Dead. It's got the whole post-apocalyptic world nailed...there is a brilliant humour amid the darkness, and the action scenes feel like a movie * Cosmopolitan * Taps into fears we all have about the world coming to an end, as Donald Trump stokes the fires of racial hatred in America, wars continue across the planet and diseases such as Zika and Ebola spread with shocking speed. * The Mail on Sunday * Hill's writing has matured along with his ideas. He plays out the apocalypse so quickly and efficiently, through small-town witnesses and television broadcasts, that it feels absolutely devastating. And in the aftermath, he juggles a huge cast of characters with aplomb, giving each their time to shine, yet still managing to keep the tension high throughout * The Guardian * Original, compulsive and very frightening * Woman & Home * Clever - but The Fireman isn't just clever, it's also a book with real soul... the deeper truths of The Fireman lie in the way it explores how we slowly build connections with those closest to us...a brave, bold and big hearted take on the end of the world * SFX * Set to blaze through bestsellers lists....exhilarating * Stuff * Beautiful and aching and striking, a poignant exploration of human relationships and an ode to the simple things * Ars Technica * A Lord of the Flies for the Twitter generation. Clever, gripping and packs a hell of a punch * Joanne Harris * Ominously superb * Nick Harkaway * This book is incredible * Lev Grossman * Joe Hill (aka Stephen King Jnr) proves he's a chip off the old block with this epic post-apocalyptic adventure * The Sunday Mirror * The Fireman by Joe Hill is a thrilling, long-lingering, morally-striking book that set my heart and mind alight. A must read. * Delve into Dystopia * Breathless adventures, pulsing emotions, things that go bump in the night and so much more, with surprises lurking on the corner of every page * Lovereading.co.uk * This is a huge cauldron of a novel that pulses with life, hope and decency as well as extreme fear and constant devastation * BestChickLit.co.uk * The Fireman is a large book but you hardly notice the pages turning and you certainly wouldn't want to rush it. There are moments of extreme and violent action, fought by real people, there are other passages that are so evocative, memorable and beautifully written, with characters to match. There are also jawdropping moments. It's the most atmospheric read I've had in a long time. * For Winter's Nights * Even though The Fireman is primarily an Apocalyptica, the human issues of corrupt power, personal strength, family, friendship and forgiveness added a level that enhanced my ability to feel invested in the story. Forget The Walking Dead- a book where you actually care for the characters' survival, The Fireman is the next big thing in Dystopian Fiction. * The Book Addict * this is a book about engagement with the world, about love, and about the need to survive in the worst of circumstances. Hill has been well known in the

Joe Hill is a recipient of the Ray Bradbury Fellowship and the winner of the A.E. Coppard Long Fiction Prize, William Crawford, World Fantasy, British Fantasy, Bram Stoker and International Horror Guild Awards. His short fiction has appeared in literary, mystery and horror collections and magazines in Britain and America. For more information, visit www.joehillfiction.com, visit joehillsthrills.tumblr.com, or follow @Joe_Hill on twitter.