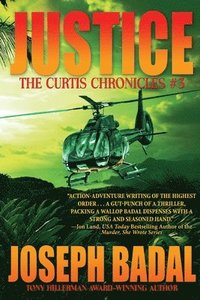 In ?Justice,? Matt and Renee Curtis return, along with their maniacal tormentor, Lonnie Jackson. On a trip to Costa Rica with their friends Esteban and Alani Maldonado, Matt and Renee believe they are beyond Jackson?s reach. They soon find out how wrong they are, however, when Jackson orchestrates the kidnapping of Renee and Alani and transports them to his human trafficking headquarters located in Nicaragua.

As with all of Badal?s novels, ?Justice? is a bold and complex thriller. It weaves an intricate plot involving multiple international locations, a human trafficking organization, the CIA, Special Operations, corrupt politicians, Bulgarian organized crime figures, Swiss bankers, and a compelling cast of engaging, inspiring, and diabolical characters.

The Curtis Chronicles is an epic series that delves into the age-old conflict between good and pure evil, where each book leaves you begging for more.
Visa hela texten

Joseph Badal grew up in a family where story-telling had been passed down from generation to generation.
Prior to a long business career, including a 16-year stint as a senior executive and board member of a NYSE-listed company, Joe served for six years as a commissioned officer in the U.S. Army in critical, highly classified positions in the U.S. and overseas, including tours of duty in Greece and Vietnam, and earned numerous military decorations.
Joe is an Amazon #1 Best-Selling Author, with 15 published suspense novels, including six books in the Danforth Saga series, two books in the Curtis Chronicles series, three books in the Lassiter/Martinez Case Files series, and three stand-alones. He has been recognized as "One of The 50 Best Writers You Should Be Reading." His books have received two Tony Hillerman Awards for Best Fiction Book of the Year, three gold medals from the Military Writers Society of America, and Finalist honors in the International Book Awards and the Eric Hoffer Awards.
Joe has written short stories which were published in the "Uncommon Assassins," "Someone Wicked," and "Insidious Assassins" anthologies. He has also written dozens of articles that have been published in various business and trade journals and is a frequent speaker at business, civic, and writers' events.
To learn more, visit his website at www.JosephBadalBooks.com.