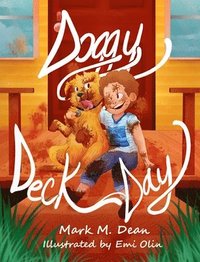 av Mark M Dean
Inbunden Engelska, 2019-10-05
209
Köp
Spara som favorit
Skickas inom 5-8 vardagar.
Fri frakt inom Sverige för privatpersoner.
It's a Doggy Deck Day! Can you guess what happens when a crazy puppy skids to a stop on the backyard deck? Find out in this adventurous tale as Puppy encounters a smelly skunk, a huge mud puddle, and chases a speedy rabbit! Oh, and last, but not least, Puppy shares lunch with his best buddy. They munch on purple pickled peppers that give Puppy some smelly wind! Come join the fun and have a smelly, muddy, sticky Doggy Deck Day!
Visa hela texten

Mark M. Dean and his family live in Southeast Ohio on a small horse farm nestled into the foothills of the Appalachian Mountains. His endeavors as an Author, Lyricist, and Poet are fueled by childhood memories of many family tales and exploits regarding the colorful characters in his clan. Mark and his family have had the pleasure of living in ten states stretching from Rhode Island to Arizona while also having lived and traveled abroad. His 20 years of Military service involved 12 family moves giving him keen insight into the importance of bonding through stories, songs, and poems. Mark struggled with childhood dyslexia and desires to payback all those who helped him develop his imagination through reading and storytelling. He earned his Undergraduate degree from Miami University while also playing Ice Hockey for the Redskins. He also earned his Master's Degree from Ohio University.