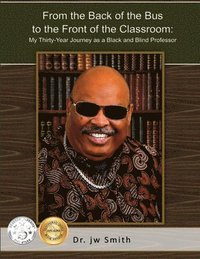 My Thirty-Year Journey as a Black and Blind Professor

av Jw Smith
Häftad Engelska, 2019-09-22
199
Köp
Spara som favorit
Skickas inom 5-8 vardagar.
Fri frakt inom Sverige för privatpersoner.
After 30 years as a professor in the field of Communication Studies, Dr. Smith reminisces about some of his experiences and how his race and differently abled intersectionality have influenced documented encounters. As a black and totally blind individual, he muses about how this distinction has both colored and shed light on what might have been innocuous or unremarkable encounters otherwise. This narrative charts his journey from leaving for graduate school to his present position as a tenured professor at a Midwest institution of higher learning. The memoir is riveting because of its vulnerability, candid honesty, and fresh transparency, as well as its conversational tone and quality. It is simultaneously an easy read but one that can also cause reflection and soul-searching without much warning. While the challenges of race and differently-abled issues are documented (and sometimes painfully so), Dr. Smith ultimately concludes that for the most part, these unique foci resulted in more positive outcomes than negative ones. It seems that only in America, is this story possible and the ultimate success of this memoir is clearly due to a strong faith in God, consistent and contagious family support, and hard work and perseverance.
Visa hela texten

Dr. jw Smith was born totally blind on the Southside of Chicago, Illinois in 1959. He attended regular public schools and after moving to Gary, Indiana as a teenager, he received his Bachelor's and Master's degrees from Indiana University and Purdue University, respectively. After graduating with his PhD from Wayne State University in Detroit in 1989, he assumed his first full-time teaching position at Indiana University-South Bend. He is presently a faculty member at Ohio University in Athens, Ohio.

After changing his major four times in the first two years of his undergraduate experience, in 1979 while sitting in a Communication Studies course, jw decided that he too wanted to be a professor much like the teacher that was leading the class that day. This decision culminated in 1989 with his PhD and thus his academic journey began. He has spent the last 30 years inspiring, challenging, encouraging, and shaping the lives of thousands of students.