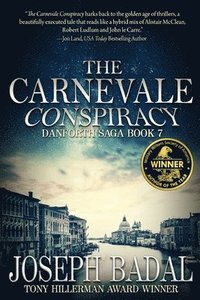 av Joseph Badal
Häftad Engelska, 2021-07-20
189
Köp
Spara som favorit
Bob and Liz Danforth are on the vacation of a lifetime-Venice, Italy during Carnevale. But, when they are caught up in the diabolical actions of a secret organization, patterned after the 11th Century's Hashashiyan, or Order of Assassins, their trip becomes a nightmare of herculean proportion.

The Carnevale Conspiracy is an epic tale that brings together international intelligence agencies; a cadre of assassins inspired by a 900-year-old sect and their leader, the Old Man of the Mountain; a global assassination campaign that targets Western leaders; an intrepid MOSSAD agent; and a cast of heroic characters and evil traitors.

Fans of Joseph Badal's Danforth Saga will find this 7th in the series full of the tension, action, and authenticity they have come to expect and enjoy.

"Relentless from start to finish. Badal just gets better and better."

"riveting. a secret organization is killing high ranking military and political officials. the lives of at least a thousand people are in jeopardy as the clandestine entity plans to unleash a thousand sleeper cells. after an attempt on his life in venice, robert danforth returns to action in a lightning paced thriller from the masterful joseph badal. a superb entry in a stellar series. highly recommended."

"the seventh entry in the Danforth Saga has got it all. An engaging cast of good guys and memorable villains. A tour of the Venice canals and ancient alleyways. And an audacious page-turner of a plot: A thousand sleeper agents trained at the assassins' lair of the Old Man of the Mountain in Iran. All with the same goal, the mass murder of an equal number of military leaders, politicians and business executives-with the Danforths as special targets-in an attempt to disrupt and dishearten the West. As the Italians would say, "moltobene!"

"The Carnevale Conspiracy harks back to the golden age of thrillers, a beautifully executed tale that reads like a hybrid mix of Alistair McClean, Robert Ludlum and John le Carre. The sprawl of Joseph Badal's seminal effort is exceeded only by the ambition of this tale where the fate and future of the world are quite literally at stake. The Carnevale Conspiracy is a thriller lover's dream, hitting the bulls-eye dead center from first page to last."

"who can resist an original take on international terrorism, smart bad guys, memorably crafted settings and a high-stakes game of revenge? joseph badal's latest soars to a climax at venice's Carnevale that takes "thriller" to breathless new heights."

"relentless from start to finish, The Carnevale Conspiracy is a tension-filled thriller that will delight fans of Brad Thor, Robert Ludlum, and Daniel Silva. As with the other novels in his Danforth Saga series, Joseph Badal masterfully weaves historical context into a modern adventure set in Venice, Italy, replete with villains you will love to hate and heroes you will cheer for."

-steven pressfield, bestselling author of A Man At Arms

"it's a dangerous world in which the characters in The Carnevale Conspiracy find ...

Joseph Badal grew up in a family where storytelling had been passed down from generation to generation.
Prior to his literary career, he served six years in the U.S. Army, including tours of duty in Vietnam and Greece, from which he received numerous decorations.
After his military service, he worked for thirty-six years in the banking & finance industries and was a founding director and senior executive of a New York Stock Exchange-listed company for sixteen years.
Joe is an Amazon #1 bestselling author, with 17 published, award-winning suspense novels. He has been recognized as "One of The 50 Best Writers You Should Be Reading." He was named 2020 Writer of the Year by the Military Writers Society of America, is a two-time winner of the Tony Hillerman Prize for Best Fiction Book of the Year, a three-time Military Writers Society of America Gold Medal Winner, an Eric Hoffer Prize Winner, a four-time "Finalist" in the International Book Awards competition, and a top prize winner on multiple occasions in the New Mexico/Arizona Book Awards competition.
He writes a regular column titled "Inspired by Actual Events" in Suspense Magazine.
Joe is a member of Croak & Dagger, Sisters in Crime, Military Writers Society of America, International Thriller Writers, Public Safety Writers Association, International Crime Writers Association, and Southwest Writers Workshop.
To learn more, visit Joe's website at www.JosephBadalBooks.com.