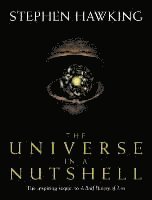 The Universe In A Nutshell

A Brief History of Time has now sold an estimated nine million copies worldwide - something of a hard act for its author to follow. In what is being promoted as the 'sequel' to that book, Professor Hawking gives an account of his attempt to combine Einstein's Theory of Relativity with Richard Feynman's idea of multiple histories, in order to reach the grail of a Theory of Everything - or big TOE, as it's charmingly named. This is a book about superstrings and p-branes, holography and supergravity, about how the 'cosmic seed' from which our universe derived was as small as a nut. The publishers are not yet releasing much text, but enough to see that it will be a fascinating (if challenging) read. And one enhanced throughout with 200 striking full colour illustrations and jazzed-up diagrams.

In 1963, Stephen Hawking contracted motor neurone disease and was given two years to live. Yet he went on to Cambridge to become a brilliant researcher and Professorial Fellow at Gonville and Caius College. Since 1979 he has held the post of Lucasian Professor of Mathematics and Theoretical Physics at Cambridge, the chair held by Isaac Newton in 1663. Professor Hawking has over a dozen honorary degrees, was awarded the CBE in 1982. He is a fellow of the Royal Society and a Member of the US National Academy of Science.