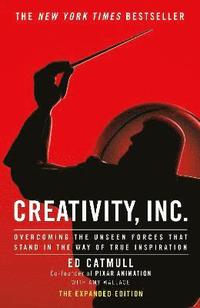 Many have attempted to formulate and categorize inspiration and creativity. What Ed Catmull shares instead is his astute experience that creativity isn't strictly a well of ideas, but an alchemy of people. In Creativity, Inc. Ed reveals, with commonsense specificity and honesty, examples of how not to get in your own way and realize a creative coalescence of art, business and innovation. * George Lucas * This is best book ever written on what it takes to build a creative organization. It is the best because Catmull's wisdom, modesty, and self-awareness fill every page. He shows how Pixar's greatness results from connecting the specific little things they do (mostly things that anyone can do in any organization) to the big goal that drives everyone in the company: Making films that make them feel proud of one another. * Robert I. Sutton, Professor of Management Science at Stanford University, author of The No A**hole Rule and co-author of Scaling Up Excellence * Just might be the best business book ever written * Forbes Magazine * Pixar uses technology only as a means to an end; its films are rooted in human concerns, not computer wizardry. The same can be said of Creativity Inc., Ed Catmull's endearingly thoughtful explanation of how the studio he co-founded generated hits such as the Toy Story trilogy, Up and Wall-E. . . . [Catmull] uses Pixar's triumphs and near-disasters to outline a system for managing people in creative businesses-one in which candid criticism is delivered sensitively, while individuality and autonomy are not strangled by a robotic corporate culture * Financial Times * Achieving enormous success while holding fast to the highest artistic standards is a nice trick-and Pixar, with its creative leadership and persistent commitment to innovation, has pulled it off. This book should be required reading for any manager * Charles Duhigg - Author of THE POWER OF HABIT *

Ed Catmull is co-founder of Pixar Animation Studios and president of both Pixar and Walt Disney Animation Studios. He has been honored with five Academy Awards, including the Gordon E. Sawyer Award for lifetime achievement in the field of computer graphics. He earned a B.S. degrees in computer science and physics and a Ph.D. in computer science from the University of Utah. He lives in San Francisco. www.CreativityIncBook.com @DisneyPixar