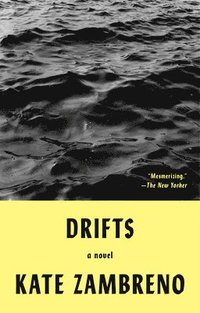 "A lyrical, fragmentary, and heartfelt story about the beauty and difficulty of artistic isolation." -Kirkus Reviews (starred review)

Haunting and compulsively readable, Drifts is an intimate portrait of reading, writing, and creative obsession. At work on a novel that is overdue, spending long days walking neighborhood streets with her restless terrier, corresponding ardently with fellow writers, the narrator grows obsessed with the challenge of writing the present tense, of capturing time itself. Entranced by the work of Rainer Maria Rilke, Albrecht Dürer, Chantal Akerman, and others, she photographs the residents and strays of her neighborhood, haunts bookstores and galleries, and records her thoughts in a yellow notebook that soon subsumes her work on the novel. As winter closes in, a series of disturbances-the appearances and disappearances of enigmatic figures, the burglary of her apartment-leaves her distracted and uncertain . . . until an intense and tender disruption changes everything.

A story of artistic ambition, personal crisis, and the possibilities and failures of literature, Drifts is the work of an exhilarating and vital writer.
Visa hela texten