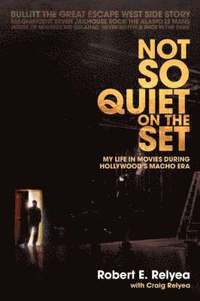 Not So Quiet on the Set

My Life in Movies During Hollywood's Macho Era

av Robert E Relyea, Craig Relyea
Häftad Engelska, 2008-05-01
159
Köp
Spara som favorit
Skickas inom 10-15 vardagar.
Gratis frakt inom Sverige över 159 kr för privatpersoner.
Finns även som
Visa alla 2 format & utgåvor
With the help of his son, Hollywood veteran Relyea recounts his largely successful career in an anecdote-driven memoir, revealing the ins-and-outs of the moviemaking business during the '50s, '60s and '70s. Relyea worked on some of the most beloved films of this period: Bullitt, The Great Escape, West Side Story and Jailhouse Rock. He produced and directed some of the most compelling actors and actresses in the entertainment business: Marlon Brando, Elvis Presley and Audrey Hepburn. He also spent hundreds of hours on set of The Alamo working hand-in-hand with John "The Duke" Wayne, and in 1966, formed a production company along with legendary bad boy Steve McQueen. All of these rich experiences are like dots on a canvas that Relyea connects in Not So Quiet on the Set. Each tale offers readers a rare backstage pass to some of Hollywood's most famous sets. Linked, they create a telling picture of the highs and lows of making movies in another era. This is not the memoir of a grating or gloating man-Relyea's writing is pleasantly candid, interspersed with photographs and short entries from his son, Craig, about growing up in the film industry. Particularly entertaining moments of the narrative mix horror with laugh-out-loud humor, as when hundreds of novice horseback riders get thrown onto the ground as things go awry on set of The Alamo. Or when Elvis fears he has swallowed a tooth cap while working on Jailhouse Rock and is rushed to the hospital for emergency surgery. On the occasions when the author doesn't transition smoothly between reminiscences, the book feels like a mere chronological romp through Relyea's life. But the anecdotes are so memorable, and detailed, it's hard not to enjoy them. For "macho era" movie buffs who are curious about Hollywood's bygone days. -Kirkus Discoveries
Visa hela texten