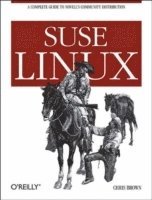 av Chris Brown
Häftad Engelska, 2006-08-01
259
Köp
Spara som favorit
Kan tyvärr inte längre levereras innan julafton.
"SUSE Linux: A Complete Guide to Novell's Community Distribution" will get you up to speed quickly and easily on SUSE, one of the most friendly and usable Linux distributions around. From quick and easy installation to excellent hardware detection and support, it's no wonder SUSE is one of the most highly rated distributions on the planet. According to Novell, SUSE is installed more than 7,000 times every day, an average of one installation every 12 seconds. This book will take you deep into the essential operating system components by presenting them in easy-to-learn modules. From basic installation and configuration through advanced topics such as administration, security, and virtualization, this book captures the important details of how SUSE works - without the fluff that bogs down other books and web sites. Instead, readers get a concise task-based approach to using SUSE as both a desktop and server operating system. In this book, you'll learn how to: install SUSE and perform basic administrative tasks; share files with other computers; connect to your desktop remotely; set up a web server; set up networking, including Wi-Fi and Bluetooth; tighten security on your SUSE system; monitor for intrusions; manage software and upgrades smoothly; and run multiple instances of SUSE on a single machine with Xen. Whether you use SUSE Linux from Novell, or the free open SUSE distribution, this book has something for every level of user. The modular, lab-based approach not only shows you how-but also explains why-and gives you the answers you need to get up and running with SUSE Linux.
Visa hela texten

"This is excellent starter text for those wishing to explore a readily available introduction to the world of Linux." - Dr Peter J Murray, British Journal of Healthcare Computing and Information Management, February 2007

Dr. Chris Brown has been using UNIX for more than 25 years, initially in his role as a Research Fellow at Sheffield University in the UK, where he carried out research into the use of tightly coupled multiprocessor systems for real-time processing of machine vision data. He has been a Linux enthusiast, user, and advocate for the last seven years and holds RedHat RHCE and Novell CLP certifications, in addition to B.A. and M.A. degrees from Cambridge University and a PhD in particle physics, which he hopes won't put you off reading his book. Chris has authored a number of hands-on training courses on Linux TCP/IP networking, systems programming, and administration. Working for a while in the USA, he managed the development of a Linux training curriculum for the training company Learning Tree International. Chris now works mostly as a freelance trainer and writer and has delivered training throughout North America and Europe for companies including Learning Tree, IBM Learning Services, and First Technology Transfer. Chris has been heavily involved in providing technical training within Novell. He wrote two five-day courses on SuSE Linux, which he delivered to Novell's consultants and IT support staff within Europe. He was also invited to deliver internal training sessions at Novell's Brainshare conference in 2004. Subsequently, Chris has been working with Novell throughout Europe to provide training to staff on Novell Linux Desktop in support of Novell's internal migration to Linux. His own company, Interactive Digital Learning, provides training content and consultancy, and also specializes in computer-based classroom training delivery systems. In his spare time Chris enjoys Bach, Jake Thackray, Flanders and Swan, gardening, reading, eating, and sleeping.