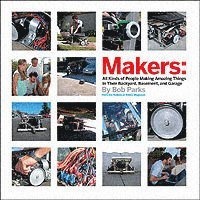 100 People Who Make Amazing Things in Their Backyard, Basement of Garage

av Bob Parks
Häftad Engelska, 2005-12-01
208
Köp
Spara som favorit
"Make" magazine, launched in February 2005 as the first magazine devoted to Tech DIY projects, hardware hacks and D.I.Y. inspiration, has been hailed as "a how-to guide for the opposable thumb set" and "Popular Mechanics for the modern age." Itching to build a cockroach-controlled robot, a portable satellite radio or your very own backyard monorail? Hankering to hack a game boy or your circadian rhythms? Rather read about people who fashion laptop bags from recycled wetsuits and build shopping cart go-karts? Make is required reading. Now, following on the heels of "Make's" wildly popular inaugural issues, O'Reilly offers "Makers", a beautiful hardbound book celebrating creativity, resourcefulness and the D.I.Y. spirit. Author Bob Parks profiles 100 people and their homebrew projects - people who make ingenious things in their backyards, basements and garages with a lot of imagination and a little applied skill. "Makers" features technologies old and new used in service of the serious and the amusing, the practical and the outrageous. The makers profiled are driven by a combination of curiosity, passion and plain old stick-to-itiveness to create the unique and astonishing. Most are simply hobbyists who'll never gain notoriety for their work, but that's not what motivates them to tinker. The collection explores both the projects and the characters behind them, and includes full-color photographs and instructions to inspire weekend hackers. Parks is just the man to track the quirky and outlandish in their natural maker habitats. A well-known journalist and author who covers the personalities behind the latest technologies, Parks' articles on innovations of all kinds have appeared in "Wired", "Outside", "Business 2.0", and "Make". He has contributed essays to "All Things Considered" on public radio and discussed trends in technology devices with Regis Philbin and Russ Mitchell on television. As a "Wired" editor, Parks directed coverage of new consumer technologies and contributed feature articles. All those who love to tinker or who fancy themselves kindred D.I.Y. spirits will appreciate Parks' eclectic and intriguing collection of independent thinkers and makers.
Visa hela texten

For more than 10 years, journalist and author Bob Parks has covered the quirky, fascinating personalities behind the latest technologies. His feature articles on innovation in business, sports, health, and the outdoors have appeared in magazines such as "Make", "Wired", "Outside", and "Business 2.0". He's read essays on National Public Radio's All Things Considered and discussed trends in consumer devices with the likes of Regis Philbin and Russ Mitchell on television. Parks worked as an editor for Wired magazine for five years, directing coverage in new consumer technologies and contributing feature articles. He received a BA cum laude in English in 1992 from Bates College.