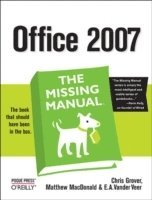 av Chris Grover, Matthew MacDonald, E A Vander Veer
Häftad Engelska, 2007-05-01
258
Köp
Spara som favorit
Finns även som
Visa alla 2 format & utgåvor
Quickly learn the most useful features of Microsoft Office 2007 with our easy to read four-in-one guide. This fast-paced book gives you the basics of Word, Excel, PowerPoint and Access so you can start using the new versions of these major Office applications right away. Unlike every previous version, Office 2007 offers a completely redesigned user interface for each program. Microsoft has replaced the familiar menus with a new tabbed toolbar (or "ribbon"), and added other features such as "live preview" that lets you see exactly what each option will look like in the document before you choose it. This is good news for longtime users who never knew about some amazing Office features because they were hidden among cluttered and outdated menus. Adapting to the new format is going to be a shock -- especially if you're a longtime user. That's where Office 2007: The Missing Manual comes in. Rather than present a lot of arcane detail, this quick & friendly primer teaches you how to work with the most-used Office features, with four separate sections covering the four programs. The book offers a walkthrough of Microsoft's redesigned Office user interface before taking you through the basics of creating text documents, spreadsheets, presentations, and databases with:

It's a great way to master all 4 programs without having to stock up on a shelf-load of different books. This book has everything you need to get you up to speed fast. Office 2007: The Missing Manual is truly the book that should have been in the box.
Visa hela texten