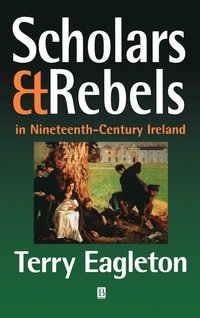 av Terry Eagleton
Inbunden Engelska, 1999-11-01
1079
Köp
Spara som favorit
Finns även som
Visa alla 1 format & utgåvor
Terry Eagleton provides a novel account of Ireland's neglected "national" intellectuals, an extraordinary group, including such figures as Oscar Wilde's father William Wilde, Charles Lever, Samuel Ferguson, Isaac Butt, Sheridan Le Fanu. They formed a kind of Irish version of "Bloomsbury", but one composed, exceptionally, of scientists, mathematicians, economists, and lawyers, rather than preponderantly of artists and critics. Their work, much of it published in the pages of the "Dublin University Magazine", was deeply caught up in networks of kinship, shared cultural interests and intersecting biographies in the outsized village of nineteenth-century Dublin.Eagleton explores the preoccupations of this remarkable community, in all its fascinating ferment and diversity, through the lens of Antonio Gramsci's definitions of "traditional" and "organic" intellectuals, and maps the nature of its relation to the Young Ireland movement, combining his account with some reflections on intellectual work in general and its place in political life. "Scholars and Rebels" is essential reading for all those concerned to understand not just the complexities of nineteenth-century Irish intellectual culture and the emergent Irish Revival, but the formation also of Irish culture in the twentieth century.
Visa hela texten

"The enjoyments of this book are its many elaborate periods, wonderful put-downs and instantly memorable apercus: practically every paragraph ends with a punch-line." Reviews "This volume invites comparison to Robert Tracy's recent The Unappeasable Host: Studies in Irish Identities." Choice "is ambitious in its scope, and it offers an original and compelling exploration of the networks that formed the 'outsized village' that was nineteenth-century Dublin". History of Education

Terry Eagleton is Professor of Cultural Theory and John Rylands Fellow at the University of Manchester. His new book forms the final part of a trilogy with Heathcliff and the Great Hunger (1995) and Crazy John the Bishop (1998). His numerous works also include The Illusions of Postmodernism (1996), Literary Theory. An Introduction (Second Edition, 1996) and The Ideology of the Aesthetic (1990), all available from Blackwell Publishers, as are Eagleton's dramatic writings St Oscar and other Plays (1997) and a collection of his essential writings, The Eagleton Reader (1997), edited by Stephen Regan.

Preface. 1. Colonial Intellectuals. 2. Portrait of a Clerisy. 3. Savants and Society. 4. The Dismal Science. 5. Young Irelanders and Others. Index.