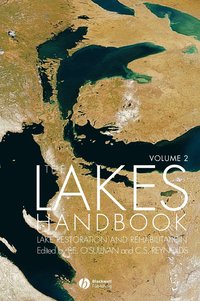 av Patrick O'Sullivan, C S Reynolds
Inbunden Engelska, 2004-12-01
1039
Köp
Spara som favorit
Skickas inom 5-8 vardagar.
Fri frakt inom Sverige för privatpersoner.
Finns även som
Visa alla 1 format & utgåvor
Continuing concern about water supply and quality, ecosystem sustainability and restoration demands that the modern approach to the management of lakes and reservoirs should be based on a sound understanding of the application of the scientific and ecological principles that underlie freshwater processes. The Lakes Handbook provides an up-to-date overview of the application of ecologically sound approaches, methods and tools using experience gained around the world for an understanding of lakes and their management. Volume one of the Handbook addresses the physical and biological aspects of lakes pertinent to lake management, emphasising those aspects particularly relevant to large, still bodies of water. Volume two then considers lake management, with particular emphasis on sustainability, restoration and rehabilitation. This handbook will be invaluable to ecologists, environmental scientists, physical geographers and hydrologists involved in limnological research, as well as advanced undergraduate and graduate students looking for authoritative reviews of the key areas of limnological study.
Visa hela texten

"...The Lakes Handbook is a valuable contribution to the understanding of limnology, a science poorly-supported by definitive texts and is highly recommended!" Environews, Southern Africa "This book is well organized and contains a wealth of information on lake restoration and rehabilitation...this is an excellent book and addresses its title very well." Environmental Conservation, February 2006

Patrick O'Sullivan was formerly Principal Lecturer in Environmental Science at the University of Plymouth, UK. His research was mainly been conducted into the development through time of lake-watershed ecosystems, and the reconstruction of lake ontogenies using palaeolimnological and documentary proxy records. Throughout his teaching career, he concentrated on development of interdisciplinary programmes in Environmental Science, and the interface between the scientific understanding of human impact upon natural processes in lakes, and the economic and philosophical ideas which lie behind the solutions to 'environmental' problems. Colin Reynolds is an Honorary Research Fellow of the Freshwater Biological Association and the Centre of Ecology and Hydrology. Much of his career was spent at The Ferry House Laboratory on the shores of Windermere, where his work was directed towards the ecology and dynamics of phytoplankton, in lakes, rivers and reservoirs. He has published over 220 research papers, two books and edited or co-edited several others. He won the International Prize in Limnetic Ecology in 1994 and, in 2001, was awarded the Naumann-Thienemann medal of SIL, the International Association for Limnology.