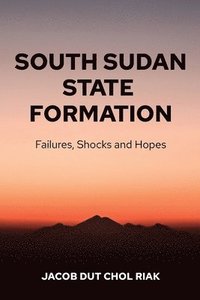 av Jacob Dut Chol Riak
Häftad Engelska, 2021-07-29
425
Köp
Spara som favorit
This book is a thought-provoking work on South Sudan's state formation and the failures and shocks surrounding its rise, set in contemporary Africa. It details the general and academic understanding of South Sudan's state formation and the many failures and shocks that occurred during its formation, and the hopes that the formation leaves for a better country in the future. The book argues that political parties, political elites, the UN (UNDP & UNMISS), Troika countries, women, youth, and civil society have all contributed in some way to South Sudan's state failure either through institutional deficits or direct intentional influence. However, the book argues for the re-institutional engineering of South Sudan's politics through federalism in the divided society and how that is a hope for South Sudan. The book premises the un-collapse of the South Sudanese State on the resilience of its citizens and their hope for a better tomorrow.

Dr. Jacob Dut Chol Riak is a renowned international comparative political scientist and seasoned political Analyst who is an Assistant Professor of International and Comparative Politics and former Head of Department of Political Science, University of Juba. Dr. Riak has researched, published and extensively consulted on democratization and governance, ethnic politics, violence and spiritual mythology, peace building, regional integration, secessions, comparative hydropolitics, politics of petroleum, State building and failure in Africa and institutional design in divided societies.His work has appeared in international peer-reviewed journals. He is the author of "The Birth of States: Successful and Failed Secessions. A comparative Analysis of South Sudan, Somaliland and Western Sahara" published in March 2021. Dr. Riak is a scholar of the Study of U.S. Institutes (SUSI) on American Political Thought.