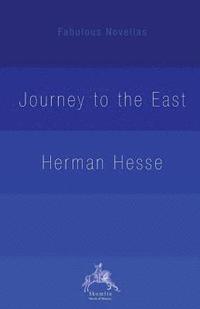 The Journey to the East

av Herman Hesse, Hilda Rosner
Häftad Engelska, 2017-12-10
179
Köp
Spara som favorit
Kan levereras innan julafton!
In Journey to the East "H. H." becomes a member of "The League", a timeless religious sect whose members include famous fictional and real characters, such as Plato, Mozart, Pythagoras, Paul Klee, Don Quixote, Puss in Boots, Tristram Shandy, Baudelaire, Goldmund and the ferryman Vasudeva. A branch of the group goes on a pilgrimage to the East in search of the Truth. The narrator speaks of travelling through both time and space, across geography imaginary and real.
But soon the Journey runs into a crisis in a deep mountain gorge called Morbio Inferiore when Leo, apparently a simple servant, disappears, causing the group to plummet into anxiety and argument.
Years later the narrator tries to write his story of the Journey, even though he has lost contact with the group and believes the League no longer exists. But the crisis in Morbio Inferiore was only a test of faith.
Visa hela texten