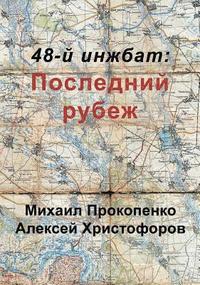 (In English) The book chronicles the first months of the Great Patriotic War on the Southwestern Front (Soviet Union), covering the period from the initial battles in June 1941 near Lviv, Ukraine, to the catastrophic encirclement of the Soviet troops in "the Kiev Cauldron" in September 1941. Tracing the path of the 48th combat engineering battalion,  the narrative recreates the dramatic upheavals of those days, and details events of the fighting. The research relies on the declassified documents of the Red Army, the secret police of NKVD, Soviet counter-intelligence "SMERSH" (including unique fragments of screening and filtration files), combat chronicles of German divisions and operational situation reports of the Nazi death squads (the Einsatzgruppen). Along with previously unpublished photos, situation reports and maps of the time, the book includes documentary information from archives, memoirs and letters from the frontlines, allowing us to lift the veil of time over some unknown pages of the history of war on the territory of Ukraine. Particular attention is paid to the fate of the killed and missing in action, prisoners of war, and the soldiers of the 48th combat engineering battalion who broke through from the Kiev encirclement.

The book is addressed to a wide range of readers interested in military history of WWII, operations of combat engineer units, as well as in questions related to the search of the missing in action.

Mikhail I. Prokopenko was born in 1966 in Kharkiv in Ukraine, Soviet Union (Ukrainian: ). He received a PhD in Computer Science (2002, Macquarie University, Sydney, Australia), MA in Economics (1994, University of Missouri, Columbia, USA), and MSc in Applied Mathematics (1988, Azerbaijan Institute of Petroleum and Chemistry, Baku, USSR). Currently, Prof. Prokopenko leads the Centre for Complex Systems in the University of Sydney, Australia. He is a Fellow of the Royal Society of New South Wales, Australia. Alexei E. Hristoforov was born in 1952 in Pechora in the Komi Republic, Russia (Russian: ; Komi: Pera). He graduated from the Chelyabinsk Military Aviation School of Navigators, a Russian Air Force school. He lives in Priozersk in Leningrad Oblast, Russia (Russian: e, Finnish: Kkisalmi).