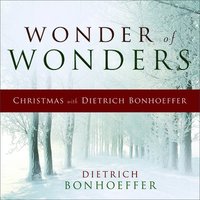 av Dietrich Bonhoeffer
Inbunden Engelska, 2015-08-24
159
Bevaka
Spara som favorit
Tillfälligt slut – klicka "Bevaka" för att få ett mejl så fort boken går att köpa igen.
"For the greatest, most profound, tenderest things in the world, we must wait." Never are moments of quiet reflection more important than during the rush of the Christmas season. These beautiful meditations from the works of Dietrich Bonhoeffer, one of the most beloved theologians of the twentieth century, are perfect as brief devotions for those who already love Bonhoeffer's work and as wonderful introductions to his writing for young readers and others not yet familiar with him. Combined with beautifully evocative, full-color photographs, these passages remind us of the profound wonders we celebrate during Advent and Christmas and of the reverence appropriate to the season. Includes a short biography of Dietrich Bonhoeffer. Perfect for gift giving.
Visa hela texten

Dietrich Bonhoeffer (1906-45) is one of the most well-known and beloved theologians of the twentieth century. He was a Christian minister, seminary professor, and a founding member of Germany's Confessing Church. One of the leading voices of opposition against Nazism during World War II, Bonhoeffer was executed for participating in a plot to assassinate Hitler. His theological views have become highly influential in the years since his death.