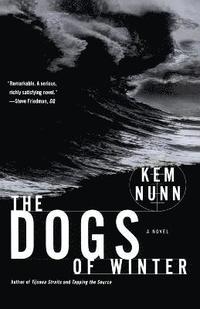 The Dogs of Winter

av Kem Nunn
Häftad Engelska, 2005-06-01
209
Köp
Spara som favorit
Finns även som
Visa alla 3 format & utgåvor
Heart Attacks is California's last secret spot--the premier mysto surf haunt, the stuff of rumor and legend. The rumors say you must cross Indian land to get there. They tell of hostile locals and shark-infested waters where waves in excess of thirty feet break a mile from shore. For down-and-out photographer Jack Fletcher, the chance to shoot these waves in the company of surfing legend Drew Harmon offers the promise of new beginnings. But Drew is not alone in the northern reaches of the state. His young wife, Kendra, lives there with him. Obsessed with the unsolved murder of a local girl, Kendra has embarked upon a quest of her own, a search for truth--however dark that truth may prove to be. The Dogs of Winter is a portrait of two men and an appealing yet troubled young woman set against an unforgettable background of stark and violent beauty.
Visa hela texten

Remarkable. A serious, richly satisfying novel. -- Steve Friedman, GQ Nunn's churning prose picks you up like a thirty-foot wave and gives you one helluva ride to the beach....[The Dogs of Winter] is the greatest novel ever written about surfing. -- Peter Plagens, Newsweek Novelist Kem Nunn is the most accomplished practitioner of California noir writing today, the principal heir to the tradition of Raymond Chandler and Nathanael West....The Dogs of Winter...is Nunn's best novel yet....There's probably not an American novelist working today who is better at choreographing and describing physical action, and few who so capably combine thrills with clear-eyed and compassionate characterizations. -- James Hynes, The Washington Post Book World No one writing in America today writes better about the surf than Kem Nunn. -- Alan Cheuse, Chicago Tribune The Dogs of Winter is a sharply focused story about good and evil....There is a lot going on in this supercharged tale of...crankster gangsters and sneaker waves, shape-shifters and great whites. There is witchcraft, insanity, savagery, and in the end, a peace that may indeed surpass understanding....Like the novel's legendary surfer, who builds extra-long redwood 'guns' to ride the big waves of the Pacific Northwest, Nunn has fashioned his own gun -- a plot sturdy enough to carry a fair amount of intellectual cargo a long way toward shore....Nunn has a keen ear for the jabber of lowlifes and nincompoops. His riffs on the argot can be wickedly funny. -- Frank Clifford, Los Angeles Times Magazine

Kem Nunn is a third-generation Californian whose previous novels include The Dogs of Winter, Pomona Queen, Unassigned Territory, and Tapping the Source, which was made in to the film Point Break. Tijuana Straits won the Los Angeles Times Book Award. He lives in Southern California, where he also writes screenplays for television and film.