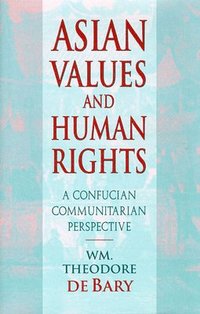 av Wm Theodore De Bary
Häftad Engelska, 2000-03-01
419
Köp
Spara som favorit
Skickas inom 7-10 vardagar.
Fri frakt inom Sverige för privatpersoner.
Kan levereras innan jul!
Since the horrific Tiananmen Square massacre in 1989, the debate on human rights in China has raged on with increasing volume and shifting context, but little real progress. In this provocative book, one of our most learned scholars of China moves beyond the political shouting match, informing and contextualizing this debate from a Confucian and a historical perspective. "Asian Values" is a concept advanced by some authoritarian regimes to differentiate an Asian model of development, supposedly based on Confucianism, from a Western model identified with individualism, liberal democracy, and human rights. Highlighting the philosophical development of Confucianism as well as the Chinese historical experience with community organization, constitutionalism, education, and women's rights, Wm. Theodore de Bary argues that while the Confucian sense of personhood differs in some respects from Western libertarian concepts of the individual, it is not incompatible with human rights, but could, rather, enhance them. De Bary also demonstrates that Confucian communitarianism has historically resisted state domination, and that human rights in China could be furthered by a genuine Confucian communitarianism that incorporates elements of Western civil society. With clarity and elegance, Asian Values and Human Rights broadens our perspective on the Chinese human rights debate.
Visa hela texten

The book is fascinating...Asian Values and Human Rights is an attempt to present and defend an interpretation of Confucianism that may be relevant for Confucian-influenced societies in East Asia, especially China...Too often, this kind of debate involves recovering obscure and long-forgotten references, and 'proving' that Asian societies profess this or that political value. This only serves to reinforce pre-existing political viewpoints. De Bary, however, supports his account of Confuscianism with compelling evidence that a communitarian ethic of participatory, non-coercive community life also had historical importance. -- Daniel A. Bell Times Literary Supplement [UK] [De Bary's] book argues brilliantly against the view that somehow 'Asian values' based on the 'Analects' of Confucius are irreconcilable with Western models of human rights...A great deal of wisdom and scholarship has gone into this book and it is highly recommended. -- Arnold Beichman Washington Times [William Theodore de Bary] has analyzed Confucianism not merely as a window to insight on China or premodern China, but as a manner of thinking, addressing genuine and perennial questions of human life. He strongly rejects the ideological construction of 'Asian values.' Confucianism, properly understood, addresses the human condition, not simply the 'Asian' or Chinese situation; properly understood, it in no way endorses arbitrary power. In previous work de Bary has shown Confucian affinities with liberal thinking or at least the liberal temperament. In this book he stresses, probably more pertinently, common themes in Confucian and contemporary communitarian modes of thought. -- Peter R. Moody, Jr. Review of Politics [De Bary] skillfully synthesizes competing Western democratic and East Asian authoritarian philosophies, contending that true Confucian values are compatible with Western concepts of the individual, enhancing democracy and human rights and justifying communitarianism...Asian Values and Human Rights is strongly recommended to both scholar and general reader, given the urgency of worldwide environmental problems 'requiring a common approach and common standards to these inseparable problems of the human-earth community. -- L. Gerald Fielder Journal of Church and State The virtue of de Bary's study is that it draws on his lifetime work on Confucianism as well as on the work of several other prominent scholars in this area. It is thus highly erudite but also written in a beautifully lucid style that even the uninitiated reader will find compelling. -- Lynda S. Bell Ethics and International Affairs This collection of lectures by Wm. Theodore De Bary...expanded for publication, would be my recommendation as that 'one good book' on Confucianism. -- Gordon Bennett Perspectives on Political Science 19991001 Wm. Theodore de Bary is an illustrious exemplar of the great tradition of classical Sinology, a discipline that called for the meticulous reading and interpreting of the Confucian canon and the total command of nearly three millennia of Chinese philosophical thought. In this slender volume, de Bary aggressively takes on two contemporary Asian issues and punches huge holes in the arguments of both the champions of "Asian values" and those who hold that human values are not applicable to Asian societies...What de Bary admirably succeeds in doing is to demonstrate that the Confucian tradition was filled with thinkers who appreciated liberal values, and that it was not an authoritarian ideology. -- Lucian W. Pye Journal of Politics 19990801