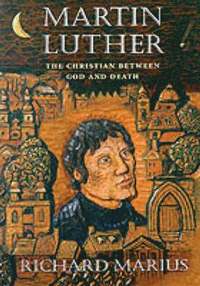 The Christian between God and Death

av Richard Marius
Häftad Engelska, 2000-11-01
309
Köp
Spara som favorit
Skickas inom 7-10 vardagar.
Gratis frakt inom Sverige över 159 kr för privatpersoner.
Few figures in history have defined their time as dramatically as Martin Luther. And few books have captured the spirit of such a figure as truly as this robust and eloquent life of Luther. A highly regarded historian and biographer and a gifted novelist and playwright, Richard Marius gives us a dazzling portrait of the German reformer--his inner compulsions, his struggle with himself and his God, the gestation of his theology, his relations with contemporaries, and his responses to opponents. Focusing in particular on the productive years 1516-1525, Marius' detailed account of Luther's writings yields a rich picture of the development of Luther's thought on the great questions that came to define the Reformation. Marius follows Luther from his birth in Saxony in 1483, during the reign of Frederick III, through his schooling in Erfurt, his flight to an Augustinian monastery and ordination to the outbreak of his revolt against Rome in 1517, the Wittenberg years, his progress to Worms, his exile in the Wartburg, and his triumphant return to Wittenberg. Throughout, Marius pauses to acquaint us with pertinent issues: the question of authority in the church, the theology of penance, the timing of Luther's "Reformation breakthrough," the German peasantry in 1525, Muntzer's revolutionaries, the whys and hows of Luther's attack on Erasmus. In this personal, occasionally irreverent, always humane reconstruction, Luther emerges as a skeptic who hated skepticism and whose titanic wrestling with the dilemma of the desire for faith and the omnipresence of doubt and fear became an augury for the development of the modern religious consciousness of the West. In all of this, he also represents tragedy, with the goodness of his works overmatched by their calamitous effects on religion and society.
Visa hela texten

Marius's searching and thoughtful biography of the German monk largely responsible for the Protestant Reformation is a marvelously engrossing, in some ways surprisingly empathetic, attempt to fathom the mind and heart of this remarkable man...There can be no doubt that this book is destined to become a classic. It is an exemplary work of scholarship written with the kind of verve that will appeal to the ordinary reader...Pithy, urbane, even witty, this is one of those extraordinary biographies that really brings its subject to life. -- Merle Rubin Christian Science Monitor [A] splendid new life of Martin Luther...Working impressively from primary sources and writing principally about the first two-thirds of Luther's life, Marius offers what he calls a 'nonreligious' approach to Luther's revolution...In effect, he sees the Protestant Reformation as a counter-Renaissance, aborting the gentler tempering of Christiandom that the revival of classical learning and classical moral philosophy had begun in Italy...The originality of the book lies...in Marius's nuanced and persuasive reconstruction of the death-obsession that underlay an extraordinary character's world-historical career. -- Jack Mile Boston Globe This vibrant and well-researched study brings us face to face with the mysterious depths and difficulties of belief as it took shape in one of Christianity's most fascinating figures. Its shows us how rich, and how fraught with doubt and struggle, Christian belief can be. Marius acknowledges his as an 'essentially nonreligious' approach to his subject, but he nonetheless addresses the theological, liturgical, and biblical elements of Luther's thought with sympathy and admirable nuance. At the same time--in part through refreshingly uncompromising translations of Luther's pervasively scatological language--Marius allows us to see and reflect on Luther the person, a man who combined the most powerful theological mind of his time with an unforgiving and vulgar temperament, an astonishing capacity for work, and a 'raging melancholy'...[Marius] is not afraid to poke some holes in the Luther legend..., but this historical detective work, however interesting, is ultimately a side-note. Far more central to the book--and far more impressive--is Marius's ability to communicate the power and the paradox of Luther's theological vision...Marius's book is an important achievement for the way it forces us to ask ourselves about different forms of religious doubt, and to read Luther with these differences in mind...Marius's book has much to teach us about Luther and about complexes of belief and doubt in the Christian heart. -- Tyler T. Roberts, Boston Book Review Richard Marius's fine new biography of Luther resumes that traditional focus of interest in a life first prepared for in 'years of silence' to 1517 (when Luther was thirty-four), and then lived at centre stage in the period down to the 1520s. The early years, which are relatively well documented, at least by Luther's own often highly coloured reminiscences, are illuminatingly covered, Professor Marius having some particularly imaginative speculations about parental...influences on Luther...Richard Marius writes vividly and clarifies complex matters for students. -- Michael Mullett Times Literary Supplement Richard Marius has written a biography of Luther from which all readers--believers and unbelievers--will profit...It is a masterpiece: a lifetime's study turned into a panoramic consideration of what the whole Christian story implies. If anyone seeks to understand Luther, here he is, in one of the best English portraits of the 20th century. -- Diarmaid MacCulloch The Times Richard Marius stands aside from the theological polemics to re-examine Luther's life and work and to explicate afresh the nature and evolution of his beliefs. In following his life and works from childhood to 1526, when Luther was 43, Marius retraces the key moments in Luther's biography...[and] debunks many myt

Richard Marius was a historian, novelist, playwright, and a member of the Harvard faculty.

Preface 1. Luther's Europe 2. The Early Years 3. The Flight to the Monastery 4. Years of Silence 5. Rome and Wittenberg 6. The Lectures on the Psalms 7. The Lectures on the Romans, Galatians, and Hebrews 8. The Controversy over Indulgences 9. Preparing for Battle 10. Beyond Heidelberg 11. The Leipzig Debate 12. The Discovery of the Gospel 13. The Plunge into the Unknown 14. The Breaking Point 15. The Freedom of a Christian 16. The Progress to Worms 17. Exile in Patmos 18. Back to Wittenberg 19. Tribulation 20. The September Testament 21. The Authority of Princes 22. On the Jews 23. Worship and Ethics 24. Opposition and Divisions 25. The Peasants' Rebellion 26. Marriage 27. The Attack on Erasmus 28. Epilogue Notes Index