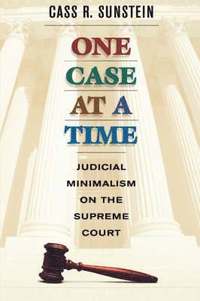 One Case at a Time

Judicial Minimalism on the Supreme Court

av Cass R Sunstein
Häftad Engelska, 2001-05-01
369
Köp
Spara som favorit
Skickas inom 5-8 vardagar.
Fri frakt inom Sverige för privatpersoner.
Abortion, affirmative action, the "right to die," pornography and free speech, homosexuality and sex discrimination: as eagerly as the Supreme Court's rulings on these hot issues are awaited and as intently as they're studied, they never seem to settle anything once and for all. But something is settled in the process--in the incremental approach--as Cass Sunstein shows us in this instructive book. One of America's preeminent constitutional scholars, Sunstein mounts a defense of the most striking characteristic of modern constitutional law: the inclination to decide one case at a time. Examining various controversies, he shows how--and why--the Court has avoided broad rulings on issues from the legitimacy of affirmative action to the "right to die," and in doing so has fostered rather than foreclosed public debate on these difficult topics. He offers an original perspective on the right of free speech and the many novel questions raised by Congress's efforts to regulate violent and sexual materials on new media such as the Internet and cable television. And on the relationship between the Constitution and homosexuality and sex discrimination, he reveals how the Court has tried to ensure against second-class citizenship--and the public expression of contempt for anyone--while leaving a degree of flexibility to the political process. One Case at a Time also lays out, and celebrates, the remarkable constellation of rights--involving both liberty and equality--that now commands a consensus in American law. An authoritative guide to the Supreme Court, the book offers a new understanding of the American Constitution, and of the relationship between democracy and constitutionalism, and between rights and self-government.
Visa hela texten

With his new book, Sunstein joins a distinguished line of liberal constitutional theorists who have defended the democratic value of judicial modesty...[One Case at a Time is] uniquely well-suited to an age that has lost its constitutional faith...No other scholar has captured the temper of the current majority as neatly as Sunstein, nor has anyone else attempted to provide a theoretical justification for what other observers took to be ad-hockery or improvisation. For these reasons, Sunstein's book deserves close attention. -- Jeffrey Rosen New Republic Sunstein is among this country's most respected legal scholars [and] One Case at a Time reflects [his] mastery of Supreme Court law, of constitutional theory and of political science...One Case at a Time presents a fascinating argument: that there is a hidden majority of [judicial minimalist] Justices, that it is right in what it is doing and that it is adjudicating in a way that moves beyond the recent ideological stalemate about the Supreme Court's role...[Sunstein's] book demonstrates what a shame it is that the Clinton White House hasn't picked him to serve as a Federal judge. The Reagan and Bush Administrations put accomplished legal theorists on the bench to turn their conservative vision into legal reality. But the Clinton team has failed to follow the Reagan-Bush lead... One Case at a Time makes that reluctance look like a significant lost opportunity. Respectful of the political branches, mindful of the role of the Supreme Court in the whole of American government, this admirable book makes a judicious case for a philosophy of judging as a humble, difficult, essential art. The book also demonstrates that Sunstein would practice that art well. -- Lincoln Caplan New York Times Book Review In a lucid examination of specific cases, Mr. Sunstein demonstrates how [judicial minimalism] should be done and achieves what has so far been elusive, a genuine theory of judicial minimalism, which many judges strive for but often have difficulty describing or justifying. The Economist With One Case at a Time, Cass Sunstein may well become known as the Nathan Detroit of constitutional law. For this is a shrewd and clever book. -- Gary McDowell Washington Times In One Case at a Time, Sunstein describes the current Supreme Court's 'judicial minimalism'--deciding cases as narrowly as possible, without widely applicable rules. This position, he urges, can support deliberative democracy, particularly if the issues involved are complex and no citizen consensus has emerged. Sunstein outlines his arguments and applies it in analyzing recent decisions on 'affirmative action, discrimination on the basis of sex and sexual orientation, the right to die, and new issues of free speech raised by...communications technologies.' He then addresses alternatives to minimalism, mainly Justice Scalia's 'democratic formalism' and the complaint that minimalist decisions lack theoretical depth as well as breadth, concluding by summarizing his view of the place of judicial minimalism in a democracy. -- Mary Carroll Booklist

Bloggat om One Case at a Time

Cass R. Sunstein is the Robert Walmsley University Professor at Harvard, where he is founder and director of the Program on Behavioral Economics and Public Policy. He is the most cited law professor in the United States and probably the world. He has served as Administrator of the White House Office of Information and Regulatory Affairs and as a member of the President's Review Group on Intelligence and Communications Technologies. Winner of the 2018 Holberg Prize, Sunstein is a columnist for Bloomberg View and a frequent adviser to governments all over the world. His many books include the bestseller Nudge: Improving Decisions about Health, Wealth, and Happiness (with Richard H. Thaler), Simpler: The Future of Government, and Republic.com.