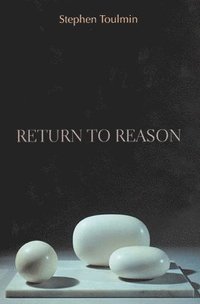 av Stephen Toulmin
Häftad Engelska, 2003-10-01
443
Köp
Spara som favorit
Skickas inom 7-10 vardagar.
Gratis frakt inom Sverige över 159 kr för privatpersoner.
The turmoil and brutality of the twentieth century have made it increasingly difficult to maintain faith in the ability of reason to fashion a stable and peaceful world. After the ravages of global conflict and a Cold War that divided the world's loyalties, how are we to master our doubts and face the twenty-first century with hope? In Return to Reason, Stephen Toulmin argues that the potential for reason to improve our lives has been hampered by a serious imbalance in our pursuit of knowledge. The centuries-old dominance of rationality, a mathematical mode of reasoning modeled on theory and universal certainties, has diminished the value of reasonableness, a system of humane judgments based on personal experience and practice. To this day, academic disciplines such as economics and professions such as law and medicine often value expert knowledge and abstract models above the testimony of diverse cultures and the practical experience of individuals. Now, at the beginning of a new century, Toulmin sums up a lifetime of distinguished work and issues a powerful call to redress the balance between rationality and reasonableness. His vision does not reject the valuable fruits of science and technology, but requires awareness of the human consequences of our discoveries. Toulmin argues for the need to confront the challenge of an uncertain and unpredictable world, not with inflexible ideologies and abstract theories, but by returning to a more humane and compassionate form of reason, one that accepts the diversity and complexity that is human nature as an essential beginning for all intellectual inquiry.
Visa hela texten

In Return to Reason, Stephen Toulmin sums up a lifetime's work in rescuing the reasonableness of ordinary practices from the oblivion to which they are consigned when we equate reason with abstract theory alone. From the knack of a wordless skill, to the work of really good professionals, he shows us how situated practice is central in real life. His critique applies to Modernism and Postmodernism alike and offers a true guide to those of us perplexed by the theoretical idols of the day. -- Robert N. Bellah, co-author of <I>Habits of the Heart and The Good Society</I> In an elegant and wide-ranging investigation through history and philosophy, Stephen Toulmin challenges the wide-spread, modern misapplications of scientific "rationality" beyond its proper bounds. He shows how the parallel recourse to "reasonableness," properly re-instituted, can help us master real-life tasks, with both cool heads and warm hearts. -- Gerald Holton, author of <I>Einstein, History, and Other Passions: The Rebellion Against Science at the End of the Twentieth Century</I> Stephen Toulmin speaks eloquently for the genius of ordinary life. Like Montaigne and Wittgenstein, he favors thinking that is practical and particular, not vacuous and formal. His book is an antidote and a warning: it is thoughtful, perceptive engagement, not theory, that allays personal and social problems. Human sciences describe our circumstances; they cannot prescribe solutions. Ideologists will resist. Dewey would cheer. -- David Weissman, author of <I>Truth's Debt to Value</I> In elegant prose, Toulmin...contends that advocates of pure reason have forgotten "the complementary concept of reasonableness," a model of intellectual practice focused on values and experience rather than facts and theories. His rich conceptual history outlines the ways in which early modern science and philosophy separated reasonableness from rationality, and the resulting imbalance in all academic disciplines. * Publishers Weekly * Toulmin shows in this readable and fascinating account, the practice of reason that produced modern science goes back to the 17th century, when traditional reasonableness was replaced by the model of geometry...Eventually--and this is perhaps one of Toulmin's most challenging insights--what came of this change is the system of disciplines that govern modern intellectual life...Throughout Return to Reason, Toulmin calmly addresses complex situations arising in modern disciplines. Indeed, the knack he shows for reasonableness illustrates his thesis. His book is both a diagnosis and, by example, a cure for what ails our scientific culture. -- Thomas D'Evelyn * Christian Science Monitor * There is now a 'loss of confidence'...in our traditional ideas about rationality, according to Toulmin. Especially among those in the humanities, he argues, the claims of rationality have been progressively challenged over the last 20 or 30 years, to the point of being sidelined. This is a common complaint and not exactly news, but Toulmin does not merely bemoan and rant, as many others have done. He offers a diagnosis and a solution. Rationality has come under threat, he believes, because of the undue influence of classical mechanics and abstract mathematical methods on our idea of what intelligent problem-solving should be. Deduction in the style of Euclid's geometry, mechanically predictable and rigorous law in the style of Galileo and Newton, indubitable certainty in the style of Descartes' 'I think, therefore I am' all exert a malign influence, insofar as they overshadow a looser, more pragmatic and less abstract concept of 'reasonableness.' What we need is more open-minded, informal reasonableness and less inappropriately mathematical rationality. Only then, Toulmin argues, can the idea of reason regain its rightful good name. -- Anthony Gottlieb * Los Angeles Times * In this mature work, Toulmin...sums up a disti

Stephen Toulmin was University Professor and Henry R. Luce Professor, Emeritus, at the University of Southern California and author of, among other books, Cosmopolis and The Uses of Argument.

Preface 1 Introduction: Rationality and Certainty 2 How Reason Lost Its Balance 3 The Invention of Disciplines 4 Economics, or the Physics That Never Was 5 The Dreams of Rationalism 6 Rethinking Method 7 Practical Reason and the Clinical Arts 8 Ethical Theory and Moral Practice 9 The Trouble with Disciplines 10 Redressing the Balance 11 The Varieties of Experience 12 The World of Where and When 13 Postscript: Living with Uncertainty Notes Index