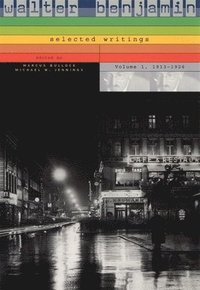 av Walter Benjamin, Marcus Paul Bullock, Michael W Jennings
Häftad Engelska, 2004-05-01
279
Köp
Spara som favorit
Skickas inom 7-10 vardagar.
Fri frakt inom Sverige för privatpersoner.
Walter Benjamin was one of the most original and important critical voices of the twentieth century, but until now only a few of his writings have been available in English. Harvard University Press has now undertaken to publish a significant portion of his work in definitive translation, under the general editorship of Michael W. Jennings. This volume, the first of three, will at last give readers of English a true sense of the man and the many facets of his thought. (The magnum opus of Benjamin's Paris years, The Arcades Project, has been published in a separate volume.) Walter Benjamin emerged from the head-on collision of an idealistic youth movement and the First World War, which Benjamin and his close friends thought immoral. He walked away from the wreck scarred yet determined "to be considered as the principal critic of German literature." But the scene, as he found it, was dominated by "talented fakes," so-to use his words-"only a terrorist campaign would I suffice" to effect radical change. This book offers the record of the first phase of that campaign, culminating with "One Way Street," one of the most significant products of the German avant-garde of the Twenties. Against conformism, homogeneity, and gentrification of all life into a new world order, Benjamin made the word his sword. Volume I of the Selected Writings brings together essays long and short, academic treatises, reviews, fragments, and privately circulated pronouncements. Fully five-sixths of this material has never before been translated into English. The contents begin in 1913, when Benjamin, as an undergraduate in imperial Germany, was president of a radical youth group, and take us through 1926, when he had already begun, with his explorations of the world of mass culture, to emerge as a critical voice in Weimar Germany's most influential journals. The volume includes a number of his most important works, including "Two Poems by Friedrich Hoelderlin," "Goethe's Elective Affinities," "The Concept of Criticism in German Romanticism," "The Task of the Translator," and "One Way Street." He is as compelling and insightful when musing on riddles or children's books as he is when dealing with weightier issues such as the philosophy of language, symbolic logic, or epistemology. We meet Benjamin the youthful idealist, the sober moralist, the political theorist, the experimentalist, the translator, and, above all, the virtual king of criticism, with his magisterial exposition of the basic problems of aesthetics. Benjamin's sentences provoke us to return to them again and again, luring us as though with the promise of some final revelation that is always being postponed. He is by turns fierce and tender, melancholy and ebullient; he is at once classically rooted, even archaic, in his explorations of the human psyche and the world of things, and strikingly progressive in his attitude toward society and what he likes to call the organs of the collective (its architectures, fashions, signboards). Throughout, he displays a far-sighted urgency, judging the present on the basis of possible futures. And he is gifted with a keen sense of humor. Mysterious though he may sometimes be (his Latvian love, Asia Lacis, once described him as a visitor from another planet), Benjamin remains perhaps the most consistently surprising and challenging of critical writers.
Visa hela texten

For many readers, [Benjamin's]...scrupulous attention to detail, this sense that everything can be made to speak, explains [his] force as a writer. His hermeneutic skill is nowhere more evident than in his essay on Goethe's Elective Affinities, the most important previously untranslated article included here. He confronts the novel from several perspectives, using it to illuminate the institution of marriage, the morality of love, and the project of artistic creation. At the same time, the essay offers a powerful--and frankly mystical--image of criticism itself...Esoteric much of the work is, but its originality inspires. If cultural studies is headed back to basics, Benjamin's luminous musings are a rewarding place to start. -- James Surowiecki Lingua Franca To encounter Benjamin's piece ["The Life of Students"] is like overhearing the opening notes of one of the most intellectually compelling friendships of our century. It is greatly to the credit of Harvard University Press to have made the text finally available to English-speaking readers. In general, the editors of this volume have made an exemplary choice of what to include, and when their projected multi-volume section is complete, it will constitute the most important compilation of Benjamin's writings outside the mammoth German Collected Works. -- Michael Andre Bernstein New Republic [A] splendid new edition of Benjamin's own Selected Writings. Times Higher Education Supplement [T]he publication of an ambitious new edition of Benjamin's selected writings [is] a genuinely exciting event. In place of a limited selection of Benjamin's more immediately accessible pieces, American readers now have the chance to wander the full range of his work, and to gain a real sense of the often contradictory but always provocative combination of philosophy, criticism, and cultural history that it offers. -- James Surowiecki Boston Phoenix Literary Section Benjamin has gradually emerged as a major presence in 20th-century letters. This reputation rests on his extraordinary and highly idiosyncratic gift for original and far-reaching insights. It was his ambition to become Germany's leading literary critic, a status that many no doubt would be inclined to award him posthumously...Benjamin is sometimes misunderstood, since only certain parts of his overall output have come into view here. The 65 pieces collected in this excellent first volume of the new Harvard Benjamin should help clarify the larger picture as well as deepen and enliven the discussion. -- Steve Dowden Washington Times A glance at the Table of Contents of Selected Writings--he writes on language, time, colors, children's books, love, violence, messianism--shows us at once Benjamin's provocativeness and his infinite variety. The two longest pieces, both from the early twenties and neither translated till now, are his doctoral thesis, 'The Concept of Criticism in German Romanticism,' and his long essay on Goethe's late novel, Elective Affinities...[The latter] is an exemplary piece of lit crit, brilliantly analyzing the book's layers, motifs, symbols and subtexts...Benjamin's reverent feeling for tradition gives weight to his radical readings of tradition. Both essays could be an inspiration to people doing cultural studies today. -- Marshall Berman Nation [Walter Benjamin] is no less than a major enrichment and revision of the image of Walter Benjamin's criticism in the English-speaking world. -- Tyrus Miller American Book Review Today, the presence of Walter Benjamin is invoked in aesthetics, in political philosophy, in the theory of literature and of film, in linguistics and theology...[T]his [is a] sumptuous first volume of [his] Selected Writings...[T]here is more to this feast of a book than demanding gravity. The look at 'Old Forgotten Children's Books' is an arch delight. The sketch of 'Naples' (1925) anticipates the vital part the Mediterranean was to play in Benjamin's search for inexpensive nirvanas. T

Walter Benjamin (1892-1940) was the author of many works of literary and cultural analysis. Marcus Bullock is Professor of German, University of Wisconsin-Milwaukee. Michael W. Jennings is Class of 1900 Professor of Modern Languages at Princeton University.

Metaphysics of Youth, 1913-1919 "Experience" The Metaphysics of Youth Two Poems by Friedrich Holderlin The Life of Students Aphorisms on Imagination and Color A Child's View of Color Socrates Trauerspiel and Tragedy The Role of Language in Traucrspiel and Tragedy On Language as Such and on the Language of Man Theses on the Problem of Identity Dostoevsky's The Idiot Painting and the Graphic Arts Painting, or Signs and Marks The Ground of Intentional Immediacy The Object: Triangle Perception Is Reading On Perception Comments on Gundolf's Goethe On the Program of the Coming Philosophy Stifter Every Unlimited Condition of the Will Types of History The Concept of Criticism in German Romanticism Fate and Character Analogy and Relationship The Paradox of the Cretan The Currently Effective Messianic Elements Angelus Novus, 1920-1926 The Theory of Criticism Categories of Aesthetics On Semblance World and Time According to the Theory of Duns Scotus On Love and Related Matters The Right to Use Force The Medium through Which Works of Art Continue to Influence Later Ages Critique of Violence The Task of the Translator Notes for a Study of the Beauty of Colored Illustrations in Children's Books Riddle and Mystery Outline for a Habilitation Thesis Language and Logic (I-III) Theory of Knowledge Truth and Truths / Knowledge and Elements of Knowledge Imagination Beauty and Semblance The Philosophy of History of the Late Romantics and the Historical School The Meaning of Time in the Moral Universe Capitalism as Religion Announcement of the Journal Angelus Novus Goethe's Elective Affinities Baudelaire (II, III) Calderon's El Mayor Monstruo, Los Celos and Hebbel's Herades und Mariamne Letter to Florens Christian Rang Stages of Intention Outline of the Psychophysical Problem Even the Sacramental Migrates into Myth On the Topic of Individual Disciplines and Philosophy "Old Forgotten Children's Books" Naples Curriculum Vitae (I) Reflections on Humboldt Review of Bernoulli's Bachofen Johann Peter Hehel (I): On the Centenary of His Death Johann Peter Hebel (II): A Picture Puzzle for the Centenary of His Death A Glimpse into the World of Children's Books One-Way Street A Note on the Texts Chronology, 1892-1926 Index