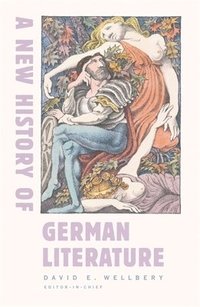 A New History of German Literature

av Hans Ulrich Gumbrecht, Anton Kaes, Joseph Leo Koerner, Dorothea E Von Mucke
Inbunden Engelska, 2005-01-01
449
Köp
Spara som favorit
Skickas inom 10-15 vardagar.
Fri frakt inom Sverige för privatpersoner.
Beställ boken senast måndag 30 november för leverans innan julafton
The revolutionary spirit that animates the culture of the Germans has been alive for at least twelve centuries, far longer than the dramatically fragmented and reshaped political entity known as Germany. German culture has been central to Europe, and it has contributed the transforming spirit of Lutheran religion, the technology of printing as a medium of democracy, the soulfulness of Romantic philosophy, the structure of higher education, and the tradition of liberal socialism to the essential character of modern American life. In this book leading scholars and critics capture the spirit of this culture in some 200 original essays on events in German literary history. Rather than offering a single continuous narrative, the entries focus on a particular literary work, an event in the life of an author, a historical moment, a piece of music, a technological invention, even a theatrical or cinematic premiere. Together they give the reader a surprisingly unified sense of what it is that has allowed Meister Eckhart, Hildegard of Bingen, Luther, Kant, Goethe, Beethoven, Benjamin, Wittgenstein, Jelinek, and Sebald to provoke and enchant their readers. From the earliest magical charms and mythical sagas to the brilliance and desolation of 20th-century fiction, poetry, and film, this illuminating reference book invites readers to experience the full range of German literary culture and to investigate for themselves its disparate and unifying themes. Contributors include: Amy M. Hollywood on medieval women mystics, Jan-Dirk Muller on Gutenberg, Marion Aptroot on the Yiddish Renaissance, Emery Snyder on the Baroque novel, J. B. Schneewind on Natural Law, Maria Tatar on the Grimm brothers, Arthur Danto on Hegel, Reinhold Brinkmann on Schubert, Anthony Grafton on Burckhardt, Stanley Corngold on Freud, Andreas Huyssen on Rilke, Greil Marcus on Dada, Eric Rentschler on Nazi cinema, Elisabeth Young-Bruehl on Hannah Arendt, Gordon A. Craig on Gunter Grass, Edward Dimendberg on Holocaust memorials.
Visa hela texten

The table of contents reveals about 250 short chapters, each located in a specific year. This was done to facilitate what Walter Benjamin described as a 'tiger's leap into the past,' in which the singularity of a literary event is decisive while what is typical is left to one side. The consequence is the fracturing of the received canon into a kaleidoscope of magical moments...As an editorial achievement, this volume sets uniformly high and innovative standards. -- Osman Durrani * Times Higher Education Supplement * This attractive thousand-page volume serves up 1300 years of German literary history like tapas. A New History of German Literature makes for compulsive browsing, and it will entertain and engage readers from a wide array of backgrounds. All quotations from German are accompanied by translations. Each entry comes with a short bibliography listing primary texts, published English translations of the primary texts, and a few choice items of scholarship...The book is comprehensively indexed. All in all, it's an instructive and delightful feast. -- William Waters * Literary Imagination * [A New History of German Literature] carries a powerful charge of enthusiasm, even of proselytizing commitment to the things it presents...In arguing for German literature vis-a-vis an imagined audience of receptive nonspecialists, it argues for literature as such. -- T. J. Reed * Times Literary Supplement * Compelling reading...[A] most impressive volume. -- Henry Pickford * Harvard Review * Monumental...The book is a treat, arranged chronologically and vigorously cross-referenced, allowing the intrepid to jump among Thomas Bernhard's rejection of an inherited past, vegetarian utopias, Wilhelm Busch's comic precursors, 'rubble literature,' the rather emo reception of The Sorrows of Young Werther, Elfriede Jelinek, and The Easter Play of Muri. -- Brandon Stosuy * Voice Literary Supplement * A New History of German Literature is large: In just over a thousand pages it winds its way over a thousand years of history, across different genres, disciplines, and cultures, from the tenth-century magical formulas written in alliterative Old High German to W. G. Sebald's 2001 novel Austerlitz...[A] stunning intellectual achievement...One can only wish that its absorbingly fresh account of literature and the interpreting process--'here and now,' as Wellbery puts it with infectious enthusiasm in his essay on Goethe's Faust--will reach the broadest possible audience. -- Mark M. Anderson * Bookforum * A New History of German Literature actually delivers far more than its title suggests. It consists of some 200 short essays by an international team of contributors, including not only literary but also political and social historians, critics of art, music, and film, philosophers, theologians, and many others. Each essay takes a significant date in the last thirteen centuries--publications, conjunctions, revolutions, catastrophes--and offers an exegesis that illuminates a major figure or phenomenon. The result adds up to a series of dazzling glimpses of transcendence, a sequence of microcosms, tantalizingly brief but almost always to the point. It is a monument to American scholarship. No review could do justice to the richness of this encyclopedic work, which is presumably not intended to be read from beginning to end, but to be dipped into and sampled at leisure...This book is a veritable banquet...By insisting that each essay be highly selective, capturing only the essential physiognomy of its subject with minimal biographical or critical ballast, the editors have accomplished the seemingly impossible: to make a book of a thousand pages seem effortlessly concise...[A] celestial feast of the mind...The moment has surely come for European intellectuals to set about reviving European culture before it is too late. Europeans need books like A New History of German Literature to remind us of what we have already lost, and Americans need them as an examp