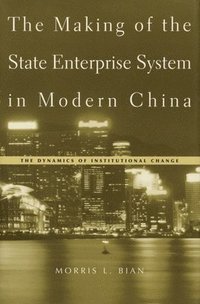 The Making of the State Enterprise System in Modern China

The Dynamics of Institutional Change

av Morris L Bian
Inbunden Engelska, 2005-05-01
699
Köp
Spara som favorit
Finns även som
Visa alla 1 format & utgåvor
When, how, and why did the state enterprise system of modern China take shape? The conventional argument is that China borrowed its economic system and development strategy wholesale from the Soviet Union in the 1950s. In an important new interpretation, Morris Bian shows instead that the basic institutional arrangement of state-owned enterprise-bureaucratic governance, management and incentive mechanisms, and the provision of social services and welfare-developed in China during the war years 1937-1945. Bian offers a new theory of institutional change that explains the formation of China's state enterprise system as the outcome of the sustained systemic crisis triggered by the Sino-Japanese war. This groundbreaking work combines critical analysis of government policies with case studies of little-studied enterprises in heavy industries and the ordnance industry. Drawing on extensive research in previously unavailable archives, Bian adds a valuable historical perspective to the current debate on how to reform China's sluggish and unprofitable state-owned firms.
Visa hela texten

Bian has produced a text that challenges orthodox conceptions of the nature of the transition from the Nationalist to the Communist regime (as well as transitions, more generally). Bian's insights into the continuities that link Imperial, Republican, and Communist China are provocative and provide an important catalyst for future research and analysis. -- Satyananda J. Gabriel * China Review International * Morris L. Bian's book offers a rich description and critical analysis of the formation of the Chinese state enterprise system. It should be welcomed by the academic world as a valuable addition to the currently existing literature, not only because it probes into a less studied area, but also because it provides insightful interpretation to a unique socioeconomic system that has profoundly remolded contemporary Chinese political, economic, and social urban life. -- Patrick Fuliang Shan * Chinese Historical Review * The strength of this well-researched book lies in the explanation of how the impact of the Sino-Japanese War and earlier military conflicts within China affected economic outcomes in China... [It] is aimed at business scholars and advanced students interested in China. Historians of Chinese studies will enjoy the book as well. This groundbreaking book is highly recommended. -- Joseph W. Leonard * Journal of Asian Business * A major study of wartime China's economic system. Bian presents an interesting view of the emergence of the danwei (work unit) system in contemporary China that sees its origins not simply in a model borrowed from the Soviet Union after 1949, but one with roots in China's republican era, particularly the wartime period. He is particularly effective in tracing ideas of the developmental state back to Sun Yatsen. Well researched and tightly organized, this is an important work in our understanding of developments in twentieth-century China. -- Parks M. Coble, University of Nebraska Bian is one of the leaders of a generation of young scholars who have placed the history of Chinese business enterprise-private and now public-at the heart of historical discussion in the field. -- William C. Kirby, Harvard University