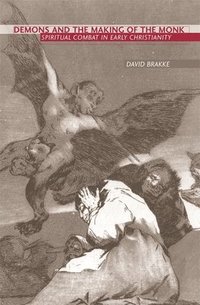 Demons and the Making of the Monk

av Professor David Brakke
Inbunden Engelska, 2006-01-01
699
Köp
Spara som favorit
Fåtal ex i lager. Skickas inom 1-2 vardagar.
Fri frakt inom Sverige för privatpersoner.
Demons--whether in embodied form or as inward temptation--make vivid appearances in early Christian monastic literature. In this finely written study of demonology and Christian spirituality in fourth- and fifth-century Egypt, David Brakke examines how the conception of the monk as a holy and virtuous being was shaped by the combative encounter with demons. Brakke studies the "making of the monk" from two perspectives. First, he describes the social and religious identities that monastic authors imagined for the demon-fighting monk: the new martyr who fights against the pagan gods, the gnostic who believes he knows both the tricks of the demons and the secrets of God, and the prophet who discerns the hidden presence of Satan even among good Christians. Then he employs recent theoretical ideas about gender and racial stereotyping to interpret accounts of demon encounters, especially those in which demons appear as the Other--as Ethiopians, as women, or as pagan gods. Drawing on biographies of exceptional monks, collections of monastic sayings and stories, letters from ascetic teachers to their disciples, sermons, and community rules, Brakke crafts a compelling picture of the embattled religious celibate. Demons and the Making of the Monk is an insightful and innovative exploration of the development of Christian monasticism.
Visa hela texten

David Brakke's Demons and the Making of the Monk...is a very sharply focused study of spiritual combat between monks and demons in fourth- and early fifth-century Egypt. Satan takes a back seat in this story: Brakke concentrates instead on the emergence of the monastic project ('The monk is now such a familiar figure that it is difficult to remember that he did not always exist'), and examines how conflict with demons was essential to the formation of this freshly minted religious identity...The book comes to life...in the second half, which is devoted to analysis of the monks' graphic stories about their encounters with demons. -- Alastair Sooke Times Literary Supplement This is a fruitful book which deserves attentive reading, above all in its exploration of the nature of spiritual combat as seen by fourth- and fifth-century ascetics. -- Anthony Meridth SJ The Way 20070101 Brakke turns his considerable skill...to a subject of crucial importance for understanding early Christian monastic spirituality: the monk's battle with the demons. It is the singular contribution of this outstanding book to lay bare the roots of this important idea and to delineate the astonishing range of expressions to which it gave rise in early monasticism. One of the virtues of Brakke's disciplined historical analysis is that we come to see that neither "spiritual combat," nor "demons" meant one thing in early monastic experience. Rather, there were intricate and subtle differences between and among different authors, schools, and monastic traditions concerning what it meant to struggle with demons. It is Brakke's stated aim to investigate the idea of "spiritual combat" in all its complexity and variety, to understand how theological assumptions, ecclesial location, philosophical orientation, literary genre and other matters affected this crucial idea. -- Douglas Burton-Christie Spiritus: A Journal of Christian Spirituality 20070501 The implications of this work reverberate well past the monk's cell in the Egyptian desert...[Brakke]'s use of psychoanalytic concepts to explicate the narrative of monk-demon encounter, reminiscent of D. Elliott's brilliant Fallen Bodies: Pollution, Sexuality, and Demonology in the Middle Ages (Philadelphia, 1999), along with his magisterial use of intellectual history and cultural studies, reveals an innovative interdisciplinary methodology that should serve as a model for scholars of the history of religion in the twenty-first century. -- Dennis P. Quinn Religious Studies Review 20070701

Bloggat om Demons and the Making of the Monk

David Brakke is Joe R. Engle Chair in the History of Christianity and Professor of History, Ohio State University.

* Part One: The Monk in Combat *1. The Single One: The Monk against the Demons *2. The New Martyr and Holy Man: Athanasius of Alexandria's Life of Antony *3. The Gnostic: Evagrius Ponticus *4. The Vigilant Brother: Pachomius and the Pachomian Koinonia *5. The Prophet: Shenoute and the White Monastery * Part Two: War Stories *6. "The Holy and Great Fathers": Monks, Demons, and Storytelling *7. Ethiopian Demons: The Monastic Self and the Diabolical Other *8. Manly Women, Female Demons, and Other Amazing Sights: Gender in Combat *9. From Gods to Demons: Making Monks, Making Christians * Afterword: The Inner Battle * Abbreviations * Notes * Selected Bibliography * Index