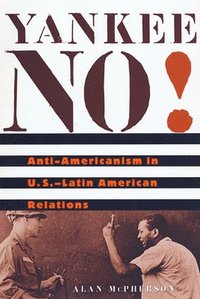 av Alan McPherson
Häftad Engelska, 2006-04-01
439
Köp
Spara som favorit
In 1958, angry Venezuelans attacked Vice President Richard Nixon in Caracas, opening a turbulent decade in Latin American-U.S. relations. In Yankee No! Alan McPherson sheds much-needed light on the controversial and pressing problem of anti-U.S. sentiment in the world. Examining the roots of anti-Americanism in Latin America, McPherson focuses on three major crises: the Cuban Revolution, the 1964 Panama riots, and U.S. intervention in the Dominican Republic. Deftly combining cultural and political analysis, he demonstrates the shifting and complex nature of anti-Americanism in each country and the love-hate ambivalence of most Latin Americans toward the United States. When rising panic over "Yankee hating" led Washington to try to contain foreign hostility, the government displayed a surprisingly coherent and consistent response, maintaining an ideological self-confidence that has outlasted a Latin American diplomacy torn between resentment and admiration of the United States. However, McPherson warns, U.S. leaders run a great risk if they continue to ignore the deeper causes of anti-Americanism. Written with dramatic flair, Yankee No! is a timely, compelling, and carefully researched contribution to international history.
Visa hela texten

Alan McPherson has not only made a valuable contribution to the literature on U.S.-Latin American relations but, more importantly, he has provided a superb analysis of anti-Americanism by identifying its variability, its ambivalence, and the U.S. resilience in confronting the challenge during the critical years framed in this book. In his sophistication and in his writing he demonstrates all the attributes of a seasoned historian. -- Lester D. Langley, author of <i>The Americas in the Modern Age</i> McPherson expertly extends the field of U.S. foreign relations into social and cultural history. In his analysis of U.S. relations with Cuba, the Dominican Republic, and Panama, he deftly avoids the trap of writing international history solely with the 'view from Washington' perspective. I unequivocally recommend it. -- Stephen Rabe, author of <i>Eisenhower and Latin America</i> This timely, deeply researched, analytically rigorous, and handsomely written study probes the many anti-Americanisms that have bedeviled U.S. relations with Latin America. Why do they hate us?' is an urgent question today. McPherson impressively demonstrates that it has profound historical roots that can inform caring policymakers eager to prevent global violence. -- Thomas G. Paterson, author of <i>Contesting Castro</i> McPherson opens a revealing window on the heretofore elusive phenomenon of anti-Americanism. In so doing he takes his place in the front ranks of younger scholars writing about U.S. foreign relations. -- William Walker, Florida International University McPherson examines the years from 1958 to 1966, when anti-Americanism was a prominent theme in inter-American diplomacy, to deliver a helpful reminder that anti-Americanism is not a new phenomenon nor a product only of the Middle East--and that it has been confronted quite effectively in the past, at least when its sources were sought out and taken seriously. He provides several vivid case studies, starting with the attacks on Vice President Richard Nixon in Caracas and continuing on to Cuba, Panama, and the Dominican Republic. Together, these examples show the variability and ambivalence of anti-Americanism; they also emphasize the importance of U.S. policies that respond to its challenges rather than dismissing it as a cynical invention of alienated elites...This well-written and balanced book should be required reading in the White House, in Langley, and around Foggy Bottom. * Foreign Affairs * [Yankee No!] makes a singular contribution to our understanding of a generally neglected aspect of inter-American relations. It represents a bold attempt to add a cultural dimension to diplomatic history. The current upsurge in anti-Americanism across the globe in the wake of the Iraq war makes its appearance most timely. -- Philip Chrimes * International Affairs * This is a book that should be read by everyone interested in foreign relations, not merely historians specializing in the field but others in the academy and general public. Latin America has always been the testing ground for the development of U.S. foreign policies, and McPherson admirably takes these case studies and demonstrates the nature of anti-Americanism, one that bears a striking resemblance to the current global phenomenon. -- Kyle Longley * American Historical Review * [McPherson's] understanding of Latin American anti-Americanism and the U.S. response is more complex and has more analytical depth than any previous study. The book is extremely well researched in both U.S. archival and Spanish-language sources, and combines a rich discussion of U.S. foreign policy through three presidential administrations, with a sophisticated attention to larger domestic historical processes in both the United States and Latin America. -- David Sheinin * International History Review * Exquisitely timed...McPherson's scrupulous historical account and subtle treatment of inter-American relations illuminates

Alan McPherson is Thomas J. Freaney, Jr., Professor of History and Director of the Center for the Study of Force and Diplomacy (CENFAD) at Temple University.