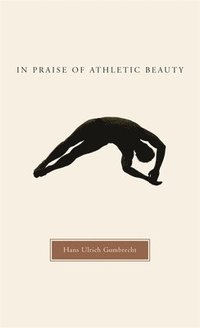 In Praise of Athletic Beauty

av Hans Ulrich Gumbrecht
Inbunden Engelska, 2006-04-01
239
Köp
Spara som favorit
Skickas inom 7-10 vardagar.
Gratis frakt inom Sverige över 159 kr för privatpersoner.
By the hundreds of millions we show up, stand in line, turn on, and tune in to watch, mesmerized, as athletes perform. And yet this experience, so widely craved and intensely felt, we commonly dismiss as "only a game." A book that looks beyond the usual explanations of why sports fascinates, In Praise of Athletic Beauty also strives for a language that can frame--even enhance --the pleasure we take in watching athletic events. The vicarious thrill, anxiety release, competitive spirit: in place of these traditional answers to the mystery of sports' allure, Hans Ulrich Gumbrecht proposes a more powerful and provocative alternative. The fascination with watching sports, he argues, is probably the most popular and potent contemporary form of aesthetic experience--in the classic, very literal sense of this concept. In exploring this idea, Gumbrecht develops a lucid reflection on the pleasures of sports spectatorship and the nature of athletic beauty. Where we might readily pronounce certain athletic moves and plays "beautiful," this book gives us the means to explore, understand, and enjoy even more acutely the aesthetic experience that our words-in-passing barely suggest. With a new perspective on the appreciation of--and, indeed, a new tone of praising--sports, Gumbrecht also offers a new way of narrating the history of athletics and a fresh vocabulary for analyzing various sports. Exploring athletic beauty, this book makes us understand the widespread passion sport inspires as an untamed form of aesthetic fascination.
Visa hela texten

Sports plays a central role in our American culture. Yet, there is deep reluctance-almost embarrassment-among the intellectual class to acknowledge the enjoyment of spectator sports. In Praise of Athletic Beauty, by Hans Gumbrecht, frees us to embrace this enjoyment. For Gumbrecht locates sports viewing within the nexus of aesthetic experience. This marvelous book-both in content and style-offers a philosophically sophisticated explanation of the beauty of athletic performance. I recommend it most strongly, especially to closet fans and critics of sports. -- Myles Brand, president of the National Collegiate Athletic Association Gumbrecht articulates what sports enthusiasts feel about athletes and their achievements. His vast knowledge of the history and philosophy of sports, combined with his passionate intellectual perspective, make this important reading for those who question the value of athletics in our time. -- Walt Harris, Bradford M. Freeman Director of Football, Stanford University Now that sports have climbed to an apex of obsession in our society, here comes a book that fascinates in probing why we play sports and why we watch sports with such fervor. In Praise of Athletic Beauty considers Kant, Descartes, Nietzsche, and a host of intellectuals throughout history to get to the bottom of our love affair with athletes and their pursuit of excellence. Gumbrecht explores with a scholarly and yet charming curiosity the admiration for athletes that so many of us share. Page by page, I found myself exclaiming: 'Yes, that's what moves me when I see a sprinter striding down the Olympic straightaway!' This is a thought-provoking and most original addition to current sports literature. -- Diana Nyad, television, radio, and print sports journalist and former world champion marathon swimmer With this study of athletic aesthetics, Stanford literature professor Gumbrecht scores as the sports world's answer to Marshall McLuhan...Gumbrecht goes beyond the usual conventions of sportswriting to probe the pleasures of sports spectatorship; his centerpiece is a philosophical, historical survey spanning centuries. He looks at the ancient Olympiads, whose champions were elevated to the status of demigods. Gladiatorial games were "metaphors for human existence," more brutal than the choreographed pageantry of knightly tournaments. After examining bare-knuckled boxing, Gumbrecht segues into the dawn of team sports and the 1896 revival of the Olympics...Gumbrecht's writing is as potent and graceful as the athletes he admires. * Publishers Weekly * In sharp contrast to the intellectuals who dismiss sports as mindless popular amusements, Gumbrecht finds in athletics the occasion for aesthetic contemplation. In the spirit of Pindar's odes praising ancient Greek boxers and charioteers, Gumbrecht hails today's sprinters and swimmers, linebackers and forwards, as icons of muscular grace. Surprisingly, the spectacle of athletic competition answers well to the analytical terms Kant employed in his eighteenth-century theory of beauty. That wonderful spectacle lifts participant and spectator alike into a focused intensity luminously different from the gray routine of ordinary life. As he surveys the epic panorama of sports--from the Panhellenic games of antiquity to the Olympic Games of today--Gumbrecht ponders the adroitness of athletes who tempt us to believe in perfection and the violence of antagonists who entrance us with the pathos of suffering. In this acute analysis, the blindness of those who see in sports nothing but an empty show gives way to a radiant vision that fuses the feats of great athletes with the poetry of Goethe and the wisdom of Plato. To be sure, Gumbrecht acknowledges--and laments--the nearly ubiquitous commercialization of modern sports. But the distracting hype of advertisers cannot fully obscure the sublime composure of the athlete nor quench the sincere gratitude of the spectator. A remarkable commentary, light-