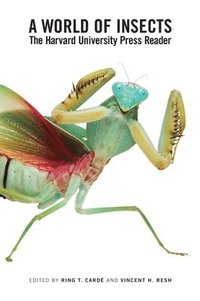 A World of Insects

av Ring T Carde, Vincent H Resh
Häftad Engelska, 2012-04-03
209
Köp
Spara som favorit
Skickas inom 7-10 vardagar.
Fri frakt inom Sverige för privatpersoner.
As we follow the path of a giant water bug or peer over the wing of a gypsy moth, we glimpse our world anew, at once shrunk and magnified. Owing to their size alone, insects' experience of the world is radically different from ours. Air to them is as viscous as water to us. The predicament of size, along with the dizzying diversity of insects and their status as arguably the most successful organisms on earth, have inspired passion and eloquence in some of the world's most innovative scientists. A World of Insects showcases classic works on insect behavior, physiology, and ecology published over half a century by Harvard University Press. James Costa, Vincent Dethier, Thomas Eisner, Lee Goff, Bernd Heinrich, Bert Hoelldobler, Kenneth Roeder, Andrew Ross, Thomas Seeley, Karl von Frisch, Gilbert Waldbauer, E. O. Wilson, and Mark Winston-each writer, in his unique voice, paints a close-up portrait of the ways insects explore their environment, outmaneuver their enemies, mate, and care for kin. Selected by two world-class entomologists, these essays offer compelling descriptions of insect cooperation and warfare, the search for ancient insect DNA in amber, and the energy economics of hot-blooded insects. They also discuss the impact-for good and ill-of insects on our food supply, their role in crime scene investigation, and the popular fascination with pheromones, killer bees, and fire ants. Each entry begins with commentary on the authors, their topics, and the latest research in the field.
Visa hela texten

This broad overview of insect studies is sure to delight, inspire, and enlighten college-level biology students and interested lay readers. -- Annette Aiello Library Journal 20120301 The editors have gathered some of the finest and most entertaining entomological writing I've ever read. -- Amy Stewart Washington Post 20120323 This illustrative overview of the insect world will be helpful and motivating to students interested in biology/entomology as well as lay readers. -- J. M. Gonzalez Choice 20120901

Bloggat om A World of Insects