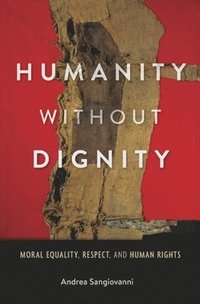 av Andrea Sangiovanni
Inbunden Engelska, 2017-06-26
369
Köp
Spara som favorit
Name any valued human trait-intelligence, wit, charm, grace, strength-and you will find an inexhaustible variety and complexity in its expression among individuals. Yet we insist that such diversity does not provide grounds for differential treatment at the most basic level. Whatever merit, blame, praise, love, or hate we receive as beings with a particular past and a particular constitution, we are always and everywhere due equal respect merely as persons. But why? Most who attempt to answer this question appeal to the idea that all human beings possess an intrinsic dignity and worth-grounded in our capacities, for example, to reason, reflect, or love-that raises us up in the order of nature. Andrea Sangiovanni rejects this predominant view and offers a radical alternative. To understand our commitment to basic equality, Humanity without Dignity argues that we must begin with a consideration not of equality but of inequality. Rather than search for a chimerical value-bestowing capacity possessed to an equal extent by each one of us, we ought to ask: Why and when is it wrong to treat others as inferior? Sangiovanni comes to the conclusion that our commitment to moral equality is best explained by a rejection of cruelty rather than a celebration of rational capacity. He traces the impact of this fundamental shift for our understanding of human rights and the norms of anti-discrimination that underlie it.
Visa hela texten

"In Humanity without Dignity, one of the most original and powerful political philosophers of our time presents his moral groundwork. Skeptical of rationalistic frameworks, Andrea Sangiovanni asks us to start from a consideration of human vulnerability and of the wrongness of treating others as inferior. The result is a comprehensive and humane vision of morality and politics for earthly, social beings-a vision that asks us to think anew about who and what we are. What more can we expect of a great piece of philosophy?"-Rainer Forst, Goethe University Frankfurt "This is an important book on a much-discussed subject: what does talk about human equality amount to? Many answers are formulated in terms of dignity, which is often grounded in the idea that there is some value-bestowing property we all share in equal measure. Sangiovanni offers an alternative account and explores in great detail and with much sophistication what it implies for the debate about human rights. Anybody interested in human rights should pay attention."-Mathias Risse, Harvard University "In this erudite and superbly written book Andrea Sangiovanni draws on sources from philosophy, literature, international law, and social science to present a new theory of equality. Rather than supposing that our commitment to the moral equality of all is based on an appeal to an account of human dignity, Sangiovanni puts forward a radical alternative that starts from an explanation of why it is wrong to treat another as an inferior. It is wrong, he argues, when the treatment involves stigmatization, dehumanization, infantilization, instrumentalization, or objectification. And these, in turn, are objectionable when and because they involve social cruelty, understood as an assault on another's capacity to develop and maintain the integrity of their sense of self. Illustrating the approach with the example of discrimination, and extending it to a detailed account of human rights, Sangiovanni has made a highly original and impressively thoughtful contribution to our understanding of the basis of human equality."-Jonathan Wolff, University of Oxford

Andrea Sangiovanni is Reader in Philosophy at King's College London.