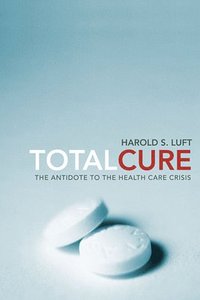 The Antidote to the Health Care Crisis

av Harold S Luft
Häftad Engelska, 2010-10-01
269
Köp
Spara som favorit
Skickas inom 5-8 vardagar.
Fri frakt inom Sverige för privatpersoner.
Proposals to reform the health care system typically focus on either increasing private insurance or expanding government-sponsored plans. Guaranteeing that everyone is insured, however, does not create a system with the quality of care patients want, the flexibility clinicians need, and the internal dynamics to continually improve the value of health care. In Total Cure, Hal Luft presents a comprehensive new proposal, SecureChoice, which does all that while providing affordable health insurance for every American. SecureChoice is a plan that restructures payment for medical care, harnessing the flexibility and responsiveness of the market by aligning the incentives of clinicians, hospitals, and insurers with those of the patient. It uses the accountability of government to ensure transparency, competition, and equity. SecureChoice has two major components. A universal pool covers the major risks of hospitalization and chronic illness, which account for almost two-thirds of all costs. Everyone would be in the pool, irrespective of employment, income, or health status. The second component emphasizes choice, flexibility, and responsibility. People will be able to choose any physician to serve as their "medical home," to keep track of their health records, provide much of their care, and suggest referrals. Clinicians will have the information and incentives to continually enhance quality. SecureChoice also facilitates improvements in areas ranging from malpractice to pharmaceuticals and establishes new roles for key stakeholders such as health insurers.
Visa hela texten

Luft has written a sober, thoughtful volume...It may also prove very influential. -- David Gratzer Forbes 20081208 Economist Harold Luft presents a thought-provoking and original proposal in Total Cure...Now is the time to evaluate SecureChoice and other health care proposals. Swift action is crucial if policymakers are to take advantage of this defining moment to enact health care reforms. -- Marian E. Gornick New England Journal of Medicine 20090129 Of the numerous discussions of health care reform, many are longer on diagnosis than on prescription. Total Cure: The Antidote to the Health Care Crisis is a notable exception to that tendency. After presenting a brief overview of the state of U.S. health care, it turns quickly to developing an innovative reform proposal, and it does so in considerably greater depth than most similar books...SecureChoice is an ingenious, carefully constructed proposal...Some readers not versed in health policy may find Total Cure: The Antidote to the Health Care Crisis challenging. It rewards the effort, however, by providing both an important new health care reform option and an illuminating tutorial on the issues at stake. -- Samuel Y. Sessions Journal of the American Medical Association 20090225 Total Cure in whole or in part should definitely be included in the syllabus of a course that addresses what we might do to reform the U.S. health care system. And for those who want to be challenged to think about how they would restructure our health care system, Total Cure is a great read--it makes you think hard. -- Katherine Swartz Inquiry 20090501 Are you sitting down? I have in hand a 318-page health care reform plan that could actually work. Really. Harold Luft's Total Cure is a calm, fearless leap across the abyss of health policy cynicism and the greatest of improbabilities: a comprehensive, detailed, and practical CTRL-ALT-DEL for the U.S. health care system...Luft's Total Cure is just what the policy doctors on Capitol Hill will need: a wise, postpartisan, durable shop manual for how to make health reform actually happen in our time. -- J. D. Kleinke Health Affairs 20090301 Brilliant and badly underappreciated...Luft seems to recognize that advances in medical technology make the traditional approach to private health insurance less viable. Yet he also sees the value in promoting constructive competition. Part of the appeal of Luft's approach is that it is very open-ended: While [Universal Coverage Pool] coverage for big-ticket costs is mandatory, wraparound coverage is optional. His plan could be financed through something like our current system of tax incentives for employers, or we could finance it through taxes. And though fairly complex in its details, the basic outlines are simple and attractive: With the UCP in place, no one will ever go bankrupt due to illness; private insurers and providers will compete on the basic of cost and quality; and the health system will get better and cheaper over time. -- Reihan Salam Forbes.com 20090831