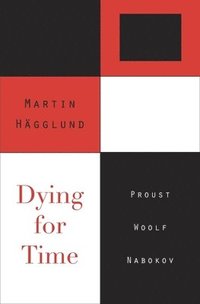 av Martin Hagglund
Inbunden Engelska, 2012-11-29
539
Köp
Spara som favorit
Finns även som
Visa alla 2 format & utgåvor
Marcel Proust, Virginia Woolf, and Vladimir Nabokov transformed the art of the novel in order to convey the experience of time. Nevertheless, their works have been read as expressions of a desire to transcend time-whether through an epiphany of memory, an immanent moment of being, or a transcendent afterlife. Martin Hagglund takes on these themes but gives them another reading entirely. The fear of time and death does not stem from a desire to transcend time, he argues. On the contrary, it is generated by the investment in temporal life. From this vantage point, Hagglund offers in-depth analyses of Proust's Recherche, Woolf's Mrs. Dalloway, and Nabokov's Ada. Through his readings of literary works, Hagglund also sheds new light on topics of broad concern in the humanities, including time consciousness and memory, trauma and survival, the technology of writing and the aesthetic power of art. Finally, he develops an original theory of the relation between time and desire through an engagement with Freud and Lacan, addressing mourning and melancholia, pleasure and pain, attachment and loss. Dying for Time opens a new way of reading the dramas of desire as they are staged in both philosophy and literature.
Visa hela texten

The Swedish philosopher and literary scholar Martin Hagglund has swiftly established himself at the center of some of today's most lively intellectual debates... Dying for Time delivers a revolutionary reading of the ways in which modernist writers express elemental aspects of human existence. In the process, it disproves the idea that deconstruction-or, indeed, literary theory per se-is always off-puttingly arid and abstract. Hagglund's approach is absolutely the opposite... This is a book that brings literature and theory into forceful collision with life's underlying realities. The resulting insight is resolutely atheistic: neither art nor thought allows access to another world of timeless perfection. Instead, each is irreducibly interwoven with the world in which we live. Some say that literary theory is dead, out of fashion, a thing of the past. But Hagglund shows how it can and should go on living: in unflinching fidelity to how it feels to be human. -- David Winters * Los Angeles Review of Books * What distinguishes this important book is that it allows us to understand these canonical modernist concerns [temporality, mourning, and desire] in a wholly new way... It is the true nature of temporal experience that we are returned to by Hagglund's profound and brilliant book, a work of literary criticism as timely as it is untimely. -- Adam Kelly * Modernism/Modernity * Dying for Time has the chance to become a minor classic...beyond the crises of the humanities it leads the desire of the writer and the reader back to its origin in a care for something whose value is only underlined by the withering of time. -- Klas Molde * Dagens Nyheter * Tremendously fruitful... To the extent that literary criticism exists to return the reader to the text, to reveal how much richer and more complex it is than one's memory of it or thesis about it, Hagglund succeeds admirably. -- Tim Langen * Russian Review * This book takes a shot across the bow of literature, reexamining the great works of Proust, Woolf, and Nabokov. Martin Hagglund takes on other professors of literature in how they interpreted these great authors. He leaves no stone unturned and no major work untouched... Hagglund makes a convincing argument. -- Kevin Winter * San Francisco Book Review * Dying for Time provides important readings of the works of Proust, Woolf, and Nabokov. Here again, Hagglund operates with the concept of 'survival,' a vantage point that allows him to tackle difficult and central issues in the corpus of these authors. He has original and compelling analyses. -- Jean-Michel Rabate * Derrida Today * Dying for Time has much higher goals than simply challenging the established, traditional reading of Proust, Woolf and Nabokov with respect to questions such as time, mortality, memory or trauma and achieves more than it promises at its inception... Apart from opening an innovative hermeneutical perspective on the works of Proust, Woolf and Nabokov-which could prove itself very fruitful for further and more in depth literary and philosophical analysis of the texts-Hagglund's book successfully challenges the traditional understanding of time, finitude and temporal being and offers a sound solution to the paradoxical logic of desire. Although Hagglund's work is to some extent indebted to Derrida's thinking, the concept of chronolibido can nevertheless be seen as one of the book's original contributions to the revisal of the traditional understanding of time and our relation to it and to our temporal finitude. -- Paul-Gabriel Sandu * Metapsychology * A compelling rethinking of the link between time and desire coupled with singularly insightful readings of novels by Marcel Proust (A la recherche du temps perdu), Virginia Woolf (Mrs. Dalloway and To the Lighthouse), and Vladimir Nabokov (Ada or Ardor: A Family Chronicle). Both as theory (of desire) and as practice (of literary analysis), Dying for Time is an unqualified success. -- Robert S. Lehman * Theory and E

Martin Hagglund is Professor of Comparative Literature and Humanities at Yale University.