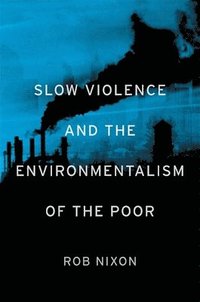 Slow Violence and the Environmentalism of the Poor

av Rob Nixon
Häftad Engelska, 2013-03-05
269
Köp
Spara som favorit
Skickas inom 7-10 vardagar.
Fri frakt inom Sverige för privatpersoner.
Finns även som
Visa alla 1 format & utgåvor
The violence wrought by climate change, toxic drift, deforestation, oil spills, and the environmental aftermath of war takes place gradually and often invisibly. Using the innovative concept of "slow violence" to describe these threats, Rob Nixon focuses on the inattention we have paid to the attritional lethality of many environmental crises, in contrast with the sensational, spectacle-driven messaging that impels public activism today. Slow violence, because it is so readily ignored by a hard-charging capitalism, exacerbates the vulnerability of ecosystems and of people who are poor, disempowered, and often involuntarily displaced, while fueling social conflicts that arise from desperation as life-sustaining conditions erode. In a book of extraordinary scope, Nixon examines a cluster of writer-activists affiliated with the environmentalism of the poor in the global South. By approaching environmental justice literature from this transnational perspective, he exposes the limitations of the national and local frames that dominate environmental writing. And by skillfully illuminating the strategies these writer-activists deploy to give dramatic visibility to environmental emergencies, Nixon invites his readers to engage with some of the most pressing challenges of our time.
Visa hela texten

This is a fine book, disturbing and revealing in content, and worthy of lengthy study. -- Jules Pretty Times Higher Education 20110915 The work is groundbreaking in its call to reconsider our approach to the slow rhythm of time in the very concrete realms of environmental health and social justice, as well as its investigation of both the power and challenges inherent in creative representation...Slow Violence and the Environmentalism of the Poor challenges readers to new modes of thinking through grave realities. In so doing, it makes a fundamental contribution to contemporary debates. -- Monica Seger World Literature Today 20120701 The previously published sections of Slow Violence and the Environmentalism of the Poor placed Nixon in the vanguard of a movement to make ecocriticism and environmentalism more attuned to imperialism (past and present), to related global injustices, and to postcolonial literatures. The book itself ensures his position among the most prominent voices of what has come to be known as postcolonial ecocriticism, part of a larger effort to open "up paths, inside the academy and beyond, to more diverse accommodations of what counts as environmental." Yet, even by the standards of this field, Slow Violence is impressively interdisciplinary and activist. Not only does it draw extensively on environmental history, the social sciences, and various kinds of journalism, it also offers keen historical and sociological insight into pressing contemporary issues. Slow Violence will be engaging and accessible to all those working in academia and beyond who are interested in social justice and its relationship with environmental change. In fact, in his role as a public intellectual, in his clear and elegant prose, and in his commitment to anti-imperial scholarship and activism, Nixon effectively follows in the footsteps of Edward Said, even as he moves to address a blind spot in Said's writing and (until relatively recently) in postcolonial literary studies: the significance of slow environmental violence for understanding imperial relationships and the often repressed ways they have shaped and continue to shape the globe. -- Byron Caminero-Santangelo Research in African Literatures 20120501 I thought the book was worth buying for its introduction alone, which presented the idea of slow violence and the practical and political challenges behind fighting it. The chapters that follow are a gallery of horrors: one scene of violence after another, each seemingly insurmountable and somehow less surprising than the last. Yet, remarkably, this is the least depressing environmental book I've read in years. By presenting these disasters alongside the writer-activists working to counteract them, Nixon leaves no room for despair. Instead I'm left buoyed, hopeful and--after 300 pages--impatient to learn more. -- Blair Braverman Waging Nonviolence 20120404 Slow Violence will, I think, become what it aspires to be: a foundational text of an "environmental humanities" that also conjugates ecologism, anti-imperialism and anti-capitalism, to be achieved through a "creative alliance" between environmental and postcolonial studies, two protagonists accustomed to ignoring each other. -- Mary Louise Pratt Interventions 20120601

Rob Nixon is Currie C. and Thomas A. Barron Family Professor in the Humanities and the Environment at Princeton University.