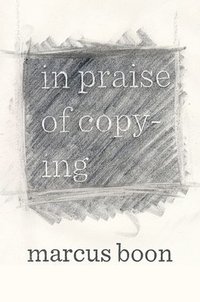 In Praise of Copying

av Marcus Boon
Häftad Engelska, 2013-04-10
309
Köp
Spara som favorit
Finns även som
Visa alla 1 format & utgåvor
This book is devoted to a deceptively simple but original argument: that copying is an essential part of being human, that the ability to copy is worthy of celebration, and that, without recognizing how integral copying is to being human, we cannot understand ourselves or the world we live in. In spite of the laws, stigmas, and anxieties attached to it, the word "copying" permeates contemporary culture, shaping discourse on issues from hip hop to digitization to gender reassignment, and is particularly crucial in legal debates concerning intellectual property and copyright. Yet as a philosophical concept, copying remains poorly understood. Working comparatively across cultures and times, Marcus Boon undertakes an examination of what this word means-historically, culturally, philosophically-and why it fills us with fear and fascination. He argues that the dominant legal-political structures that define copying today obscure much broader processes of imitation that have constituted human communities for ages and continue to shape various subcultures today. Drawing on contemporary art, music and film, the history of aesthetics, critical theory, and Buddhist philosophy and practice, In Praise of Copying seeks to show how and why copying works, what the sources of its power are, and the political stakes of renegotiating the way we value copying in the age of globalization.
Visa hela texten

At last-a taboo-breaking "Western" humanities scholar who doesn't just discuss Buddhism, but employs it in a profound rethinking of what it means to copy. Marcus Boon is that very rare thing, someone who doesn't stop thinking for no good reason. Brimming with fresh, accessible insights beckoning the reader into strange depths. Despite its title, In Praise of Copying is unique. -- Timothy Morton, author of <i>The Ecological Thought</i> and <i>Ecology without Nature</i> Bringing Buddhist insights into a startling and necessary conversation with critical theory, Boon challenges our given notions of copying by dissolving them into an illuminating interdependence. From Glen Gould to Louis Vuitton bags (and "Louis Vuitton" bags), from the exuberant mimesis of hip hop to the wisdom of dispropriation, In Praise of Copying delves far beneath the legal surface of today's copyright wars to discover a phenenomen that not only defines human culture, but is intrinsic to reality itself. -- Erik Davis, author of Techgnosis: Myth, Magic, and Mysticism in the Age of Information Much has been written on the subject of the copy in recent years, none of it so singularly illuminating as Marcus Boon's In Praise of Copying. Where the contemporary intellectual-property debate seeks endlessly to distinguish between good copies and bad, Boon cuts straight to the fatally unasked question at its core: What is a copy? From the evolution of counterfeit handbags to the confounding multiplicities of Being, Boon pursues his answers through rich fields of popular culture, technological history, and philosophy both Eastern and Western. A vast, secret life of the copy is here revealed, a road map through the deepest meanings of our age of mechanical reproduction. -- Julian Dibbell, WIRED Magazine German critic Walter Benjamin wrote some immensely influential words on the work of art in the age of mechanical reproduction. Luxury fashion houses would say something shorter and sharper and much more legally binding on the rip-off merchants who fake their products. Marcus Boon, a Canadian English professor with an accessible turn of phrase, takes us on an erudite voyage through the theme in a serious but engaging encounter with the ideas of thinkers as varied as Plato, Hegel, Orson Welles, Benjamin, Heidegger, Louis Vuitton, Takashi Murakami and many more, on topics as philosophically taxing and pop-culture-light as mimesis, Christianity, capitalism, authenticity, Uma Thurman's handbag and Disneyland. -- Miriam Cosic * The Australian * In some ways the disarming modesty and accessibility of Boon's prose--something of a rarity in contemporary scholarship in the humanities that issues from academic presses--disguises its profound ambition. In Praise of Copying ranges widely in its interests and seriously and knowledgeably invokes the Western metaphysical tradition, contemporary post-structuralist theory, and the tradition of Mahayana Buddhism to suggest that commonplace distinctions between "genuine" and "fake" or "original" and "copy" compromise rather than enable a comprehensive and responsible understanding of ourselves and the world around us...Boon has a gift for turning the material of the mundane world into the matter of sophisticated intellectual investigation...[This is] a book that deserves real attention and consideration, both in academia and the larger world. -- James Williams * PopMatters * The issues this excellent book discusses can only become more urgent as a generation comes to power that simply takes a free exchange of information for granted. -- Bradley Winterton * Taipei Times * Despite its title, Marcus Boon's book is not so much a manifesto as a philosophical meditation on...a world in which Chinese sneaker manufacturers make original Nikes during the day and fake Nikes at night; in which private copyright enforcers "bust" copy shops for selling unauthor