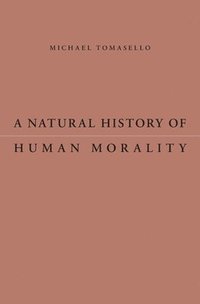 A Natural History of Human Morality

av Michael Tomasello
Inbunden Engelska, 2016-01-28
344
Köp
Spara som favorit
Finns även som
Visa alla 2 format & utgåvor
A Natural History of Human Morality offers the most detailed account to date of the evolution of human moral psychology. Based on extensive experimental data comparing great apes and human children, Michael Tomasello reconstructs how early humans gradually became an ultra-cooperative and, eventually, a moral species. There were two key evolutionary steps, each founded on a new way that individuals could act together as a plural agent "we". The first step occurred as ecological challenges forced early humans to forage together collaboratively or die. To coordinate these collaborative activities, humans evolved cognitive skills of joint intentionality, ensuring that both partners knew together the normative standards governing each role. To reduce risk, individuals could make an explicit joint commitment that "we" forage together and share the spoils together as equally deserving partners, based on shared senses of trust, respect, and responsibility. The second step occurred as human populations grew and the division of labor became more complex. Distinct cultural groups emerged that demanded from members loyalty, conformity, and cultural identity. In becoming members of a new cultural "we", modern humans evolved cognitive skills of collective intentionality, resulting in culturally created and objectified norms of right and wrong that everyone in the group saw as legitimate morals for anyone who would be one of "us". As a result of this two-stage process, contemporary humans possess both a second-personal morality for face-to-face engagement with individuals and a group-minded "objective" morality that obliges them to the moral community as a whole.
Visa hela texten

Tomasello is convincing, above all, because he has run many of the relevant studies (on chimps, bonobos and children) himself. He concludes by emphasizing the powerful influence of broad cultural groups on modern humans...Tomasello also makes an endearing guide, appearing happily amazed that morality exists at all. -- Michael Bond * New Scientist * If you're after a definitive guide to explain how humans became an ultra-cooperative and, eventually, moral species, this must be it. Evolutionary anthropologist Michael Tomasello has followed his last book, A Natural History of Human Thinking, with another hard hitter. * New Scientist * This is an extremely worthwhile addition to the literature on the evolution of morality. It is well written and strikes an excellent balance between easy accessibility and nuanced and novel ideas. This book will appeal to students and researchers from a range of disciplines. -- Richard Joyce, author of <i>The Evolution of Morality</i> This is an important synthesis of the ideas Tomasello has been developing over a number of years, extended with an offer of a philosophically relevant genealogy of morality. Readers will learn much from this informed review of the extensive literature on the evolution of morality-a substantial part of which consists of the major contributions Tomasello and his colleagues have made. -- Philip Kitcher, author of <i>The Ethical Project</i>