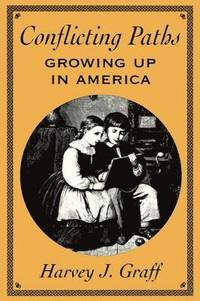 Growing Up in America

av Harvey J Graff
Häftad Engelska, 1997-09-01
539
Köp
Spara som favorit
Skickas inom 7-10 vardagar.
Gratis frakt inom Sverige över 159 kr för privatpersoner.
We grow up--so simple, it just seems to happen--and yet there are endless variations in the way we do it. What part does culture play in the process? How much do politics and economics have to do with it? As the nation has matured, have the ways people grow up changed too? This book traces the many paths to adulthood that Americans have pursued over time. Spanning more than two centuries of intense transformation in the lives of individuals and the life of a nation, Conflicting Paths is an innovative history of growing up in America. Harvey J. Graff, a distinguished social historian, mines more than five hundred personal narratives for what they can tell us about the passage from childhood to maturity. Drawing on diaries, memoirs, autobiographies, and letters, he builds a penetrating, complex, firsthand account of how childhood, adolescence, and youth have been experienced and understood--as functions of familial and social relations, as products of biology and physiology, and as cultural and political constructs. These first-person testimonies cross the lines of time and space, gender and class, ethnicity, age, and race. In these individual stories and the larger story they constitute, Graff exposes the way social change--including institutional developments and shifting attitudes, expectations, and policy--and personal experience intertwine in the process of growing up. Together, these narratives form a challenging, subtle guide to historical experiences and to the epochal remaking of growing up. The most socially inclusive and historically extensive of any such research, Graff's work constitutes an important chapter in the story of the family, the formation of modern society, and the complex interweaving of young people, tradition, and change.
Visa hela texten

Graff's history of growing up in American from the mid-18th century to the early 20th century is ambitious...Students of history will be rewarded by the effort. And Graff's message about the uses and abuses of history cannot be heard enough. -- Rebecca Starr Times Higher Education Supplement Harvey J. Graff, one of our finest social historians, has tackled one of the most difficult subjects in the national story, the experience of growing up American and what it can teach us. The result is a striking accomplishment...For his raw materials Graff has examined more than five hundred accounts of American childhoods between 1750 and 1920. Many are diaries and journals, others are memoirs and reminiscences. The breadth of the selection is impressive, as is the author's grasp of the scholarly literature on childhood and social history generally. -- Elliott West History of Education Quarterly The heavy reliance in Conflicting Paths on primary materials produces a smoothly flowing, absorbing narrative. The life stories of obscure and not-so-obscure Americans give weight and substance to Graff's account. The work is also thoroughly grounded in secondary scholarly literature on American children and American childhood. An important addition to scholarship, Graff's work deserves a place in every major library and on the desk of every American historian of children or childhood. -- Joseph M. Hawes Journal of American History Graff has written a complex history of how childhood, adolescence, and youth have been formed, experienced, transformed, and understood by Americans...Conflicting Paths should be read by all scholars in the fields of the history of children and the family. -- E. W. Carp Choice

Harvey J. Graff is Ohio Eminent Scholar in Literacy Studies and Professor of English and History at The Ohio State University and the author of The Legacies of Literacy: Continuities and Contradictions in Western Society and Culture.