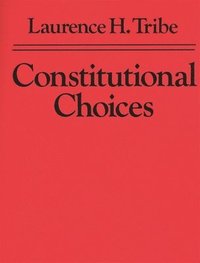 av Laurence H Tribe
Häftad Engelska, 1986-07-01
709
Köp
Spara som favorit
Skickas inom 3-6 vardagar.
Fri frakt inom Sverige för privatpersoner.
Finns även som
Visa alla 1 format & utgåvor
Constitutional Choices illuminates the world of scholarship and advocacy uniquely combined by Laurence Tribe, one of the nation's leading professors of constitutional law and most successful practitioners before the Supreme Court. In his new hook, Tribe boldly moves beyond the seemingly endless debate over which judicial approaches to enforcing the Constitution are "legitimate" and which are not. Arguing that all claims to legitimacy must remain suspect, Tribe focuses instead on the choices that must nonetheless be made in resolving actual constitutional controversies. To do so, he examines problems as diverse as interstate banking, gender discrimination, church subsidies, the constitutional amendment process, the war powers of the President, and First Amendment protection of American Nazis. Challenging the ruling premises underlying many of the Supreme Court's positions on fundamental issues of government authority and individual rights, Tribe shows how the Court is increasingly coming to resemble a judicial Office of Management and Budget, straining constitutional discourse through a managerial sieve and defending its constitutional rulings by "balancing" what it counts as "costs" against what it deems "benefits." Tribe explains how the Court's "Calculus" systematically excludes basic concerns about the distribution of wealth and power and conceals fundamental choices about the American polity. Calling for a more candid confrontation of those choices and of the principles and perspectives they reflect, Tribe exposes what has gone wrong and suggests how the Court can begin to reclaim the historic role entrusted to it by the Constitution.
Visa hela texten

Laurence H. Tribe...has provided in the essays in Constitutional Choices a brisk commentary on developments since 1978 [in American constitutional law]...This acute and wide-ranging commentary also offers ostensive proof that Americans cannot simply choose what to believe about the Constitution in the absence of all interpretive theory. -- Geoffrey Marshall Times Literary Supplement Professor Laurence Tribe's Constitutional Choices is a collection of essays at the cutting edge of constitutional law. One of the country's leading constitutional scholars...Tribe possesses all of the analytical background necessary to explore burning constitutional issues with insight and wisdom...Constitutional Choices has so much going for it that every constitutional scholar--political scientist, teacher, judge, historian, congressman, and advocate alike--has to own it, to peruse at leisure and to refer to with pride. The belief in principle that underlies the book, the self-doubt, the recognition that choice is not the 'instrumental calculation of utility or...[the] pseudo-scientific calibrations of social cost against social benefit' all enrich our understanding of the Constitution. In sum, Professor Tribe has achieved his goal of having the whole add up to more than the sum of all the parts. -- James L. Oakes Harvard Law Review Constitutional Choices consists of 16 superb--at times brilliant--essays...that argue against the present trend of grand constitutional theory toward a segmentation into groups of scholars who advocate that the legitimacy of judicial review can only be sustained by staying close the Framers' intentions (Robert Bork), by proceduralism (reinforcing the structures of representation and stopping racial prejudice, e.g., John Hart Ely), or by creating rights (Michael Perry)...The strength of the book is that it actually shows us one of the foremost constitutional scholars and practitioners at work making constitutional choices--that is, considering the relationship in the Constitution between structural values and rights values in the light of the realities of economic and social power. His analyses result in a most perceptive critique of constitutional theory and the practice of the Burger Court. -- Ronald Kahn American Political Science Review

PART 1: THE NATURE OF THE ENTERPRISE 1. The Futile Search for Legitimacy 2. The Pointless Flight from Substance 3. The False Equation of Proceduralism with Passivity: A Constitution We Are Amending-and Construing 4. Construing the Sounds of Congressional and Constitutional Silence PART 2: THE SEPARATION AND DIVISION OF POWERS 5. Silencing the Oracle: Carving Disfavored Rights out of the Jurisdiction of Federal Courts 6. Entrusting Non-Legislative Power to Congress 7. Entrusting Federal Judicial Power to Hybrid Tribunals 8. Choke Holds, Church Subsidies, and Nuclear Meltdowns: Problems of Standing? 9. The Errant Trajectory of State Sovereignty 10. Congressional Action as Context Rather Than Message: The Case of Interstate Bank Mergers 11. Guam's Vanishing Bonds: A Vignette in Taxation without Legislation PART 3: THE STRUCTURE OF SUBSTANTIVE RIGHTS 12. Compensation, Contract, and Capital: Preserving the Distribution of Wealth 13. Speech as Power: Of Swastikas, Spending, and the Mask of "Neutral Principles" 14. Dismantling the House That Racism Built: Assessing "Affirmative Action" 15. Reorienting the Mirror of Justice: Gender, Economics, and the Illusion of the "Natural" 16. Refocusing the "State Action" Inquiry: Separating State Acts from State Actors Epilogue Notes Index of Cases General Index