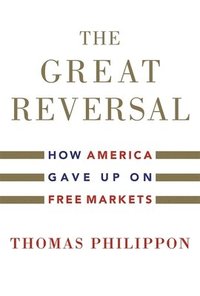 How America Gave Up on Free Markets

av Thomas Philippon
Inbunden Engelska, 2019-10-29
299
Köp
Spara som favorit
Skickas inom 7-10 vardagar.
Fri frakt inom Sverige för privatpersoner.
Finns även som
Visa alla 1 format & utgåvor
In this much-anticipated book, a leading economist argues that many key problems of the American economy are due not to the flaws of capitalism or the inevitabilities of globalization but to the concentration of corporate power. By lobbying against competition, the biggest firms drive profits higher while depressing wages and limiting opportunities for investment, innovation, and growth. Why are cell-phone plans so much more expensive in the United States than in Europe? It seems a simple question. But the search for an answer took Thomas Philippon on an unexpected journey through some of the most complex and hotly debated issues in modern economics. Ultimately he reached his surprising conclusion: American markets, once a model for the world, are giving up on healthy competition. Sector after economic sector is more concentrated than it was twenty years ago, dominated by fewer and bigger players who lobby politicians aggressively to protect and expand their profit margins. Across the country, this drives up prices while driving down investment, productivity, growth, and wages, resulting in more inequality. Meanwhile, Europe-long dismissed for competitive sclerosis and weak antitrust-is beating America at its own game. Philippon, one of the world's leading economists, did not expect these conclusions in the age of Silicon Valley start-ups and millennial millionaires. But the data from his cutting-edge research proved undeniable. In this compelling tale of economic detective work, we follow him as he works out the basic facts and consequences of industry concentration in the U.S. and Europe, shows how lobbying and campaign contributions have defanged antitrust regulators, and considers what all this means for free trade, technology, and innovation. For the sake of ordinary Americans, he concludes, government needs to return to what it once did best: keeping the playing field level for competition. It's time to make American markets great-and free-again.
Visa hela texten

A timely diagnosis of what fundamentally ails the American economy. Philippon, using solid empirical evidence and careful research, asserts that the level of competition has declined in the U.S.-- (08/27/2020) Fascinating...Philippon's work is impressive.--Ali Nikpay"The Telegraph" (02/14/2020) Excellent.--Diane Coyle"Project Syndicate" (01/08/2020) Philippon argues for a surprising conclusion: Europe is making a better job of running a competitive market economy than the home of capitalism...Time also, Philippon argues, for America to relearn the virtues of competitive capitalism from its erstwhile pupil across the pond.--Colm McCarthy"Irish Times" (01/21/2020) [A] primer on the recent woes of the U.S. economy...It attributes these troubling developments to a decline in competition that has been brought about in large part by the rise of very powerful technology companies and above all by the lack of enforcement of antitrust policies. Philippon also points to the damaging role of politicians who protect the interests of their wealthy donors by sponsoring and creating loopholes in tax and regulatory laws.-- (01/01/2019) A compelling read for those interested in the dynamics of the overall innovation economy or the political debate over antitrust and Big Tech...A timely analysis of the weakening of America's regulatory regime for protecting free market competition.--Eric Peckham"TechCrunch" (11/04/2019) A fascinating case study of rising corporate concentration and why this reflects not just impersonal economic forces but political choices... [Philippon] concludes competition has indeed declined to the detriment of consumers. His novel contribution, though, is to contrast this with the experience of Europe... Where the U.S. was once the world's teacher, it may be time to be the pupil.-- (09/04/2019) Everyone in tech or interested in tech ought to read this book--it provides a rigorous, but easy-to-grasp look at the economics of consolidation and what it does to markets, prices, and products.--Nilay Patel"The Verge" (11/13/2019) Examines money in politics, and carefully knocks down tendentious arguments that such behavior does not simply reflect the rich purchasing policy outcomes that benefit themselves...Some of Philippon's findings are eye-popping.--Ryan Cooper"American Prospect" (12/06/2019) Fascinating...In one industry after another, [Philippon] writes, a few companies have grown so large that they have the power to keep prices high and wages low. It's great for those corporations--and bad for almost everyone else...Too often, both parties are still confusing the interests of big business with the national interest. And American families are paying the price.-- (11/10/2019) In this seminal book, economist Philippon uses detailed evidence to argue that, far from being the home of free-market competition, the U.S. today has less competition than the much-maligned EU, particularly in its product markets, which are riddled with monopoly and monopsony. This is not the result of natural forces, but of deliberate policy. Declining competition has raised profits, depressed wages, weakened investment and undermined productivity growth. The U.S. needs a reinvigoration of antitrust.-- (12/03/2019) Provides an in-depth, evidence-based examination of how unchecked corporate power harms workers, consumers, and the economy, all while making a passionate case in favor of competitive markets.--ProMarket (12/20/2019) Should we love American capitalism, or hate it? Are large corporations making our lives better through endless innovation and price reductions, or are they exploiting their workers and their customers to enrich the few? Would European-style regulation make things better, or worse? Thomas Philippon's eloquent book has the answers. It is an invaluable contribution to one of today's most important debates.--Angus Deaton, Nobel Laureate in Economic Sciences Superbly exposi

Thomas Philippon is the Max L. Heine Professor of Finance at the Stern School of Business, New York University. He was named one of the top 25 economists under 45 by the IMF and won the Bernacer Prize for Best European Economist. He currently serves as an academic advisor to the Financial Stability Board and to the Hong Kong Institute for Monetary and Financial Research. He was previously an advisor to the New York Federal Reserve Bank and a board member of the French prudential regulatory authority.