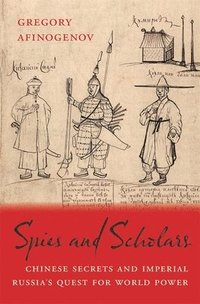 av Gregory Afinogenov
Inbunden Engelska, 2020-04-14
423
Köp
Spara som favorit
Finns även som
Visa alla 1 format & utgåvor
A Financial Times Best Book of the Year The untold story of how Russian espionage in imperial China shaped the emergence of the Russian Empire as a global power. From the seventeenth to the nineteenth century, the Russian Empire made concerted efforts to collect information about China. It bribed Chinese porcelain-makers to give up trade secrets, sent Buddhist monks to Mongolia on intelligence-gathering missions, and trained students at its Orthodox mission in Beijing to spy on their hosts. From diplomatic offices to guard posts on the Chinese frontier, Russians were producing knowledge everywhere, not only at elite institutions like the Academy of Sciences in St. Petersburg. But that information was secret, not destined for wide circulation. Gregory Afinogenov distinguishes between the kinds of knowledge Russia sought over the years and argues that they changed with the shifting aims of the state and its perceived place in the world. In the seventeenth century, Russian bureaucrats were focused on China and the forbidding Siberian frontier. They relied more on spies, including Jesuit scholars stationed in China. In the early nineteenth century, the geopolitical challenge shifted to Europe: rivalry with Britain drove the Russians to stake their prestige on public-facing intellectual work, and knowledge of the East was embedded in the academy. None of these institutional configurations was especially effective in delivering strategic or commercial advantages. But various knowledge regimes did have their consequences. Knowledge filtered through Russian espionage and publication found its way to Europe, informing the encounter between China and Western empires. Based on extensive archival research in Russia and beyond, Spies and Scholars breaks down long-accepted assumptions about the connection between knowledge regimes and imperial power and excavates an intellectual legacy largely neglected by historians.
Visa hela texten

The history of Sino-Russian relations appears in a much-altered light thanks to Gregory Afinogenov's impressive new book. From the mid-17th century, the Tsarist empire outdid all other European powers in gathering political, industrial, and commercial intelligence about China under the Qing dynasty. It is a little-known story, and the Georgetown University scholar tells it beautifully. -- Tony Barber * Financial Times * Superb...At once a history of science, of empire, and of espionage, the book traces the rise of the Russian empire as a putative rival to Qing dynasty China in the Far East. Afinogenov has chosen a genuinely compelling cast of characters to populate this story of imperial intrigue...A vividly written, entertaining, and skillfully researched history of information in motion. -- Benjamin Breen * New Rambler * Long before Chinese attempts to pilfer U.S. technologies, the Qing dynasty (1644-1912) was the target of espionage by Western powers eager to probe its boundaries and discover the secrets of its crafts. As Gregory Afinogenov traces in this vivid account, Russia-which frequently traded and clashed with the Qing-was one of the main players in this early great game as it sought the status of a global power. -- James Palmer * Foreign Policy * Details three centuries of Russian attempts to pry information out of China, from the secrets of porcelain-making to Qing policies and inclinations...Afinogenov is a clear writer with a penchant for the interesting story and arresting personality...His focus on information and the people that were involved in gathering it provides a surprisingly effective lense through which to view the history Sino-Russian relations. -- Peter Gordon * Asian Review of Books * Draws on never-before-seen material from Russian archives...Afinogenov's research shows that Russian intelligence on China was highly coveted in Europe, granting Moscow greater prestige among European powers. -- Bethany Allen-Ebrahimian * Axios * A wonderful book-wide-ranging, creative, richly researched, engagingly written-on a topic general readers will be thrilled to discover and specialists will be stimulated to rethink in new ways. Spies and Scholars is a major contribution to the study of Russia's relations with China and the history of Russia's place in the world during the early imperial era. -- Willard Sunderland, author of <i>The Baron's Cloak: A History of the Russian Empire in War and Revolution</i> An impressive work on multiple levels. Spies and Scholars combines diplomatic history and history of knowledge while focusing on a relationship and period-between the Qing Empire in China and the Romanov Empire in Russia during the eighteenth century-that has not yet received the attention it deserves. One is stunned by how significant the Russian conduit is for most European knowledge about the Chinese at the time. Afinogenov writes engagingly and the book is, in many places, a page-turner. -- Michael Gordin, author of <i>Scientific Babel: How Science Was Done Before and After Global English</i> An outstanding study of imperial Russia's centuries-long effort to gather intelligence about Qing China. Under Afinogenov's shrewd gaze, opaque institutions resolve into a galaxy of remarkably colorful characters-diligent scholars and posturing grifters; pious missionaries and their depraved brethren; scheming careerists and timeserving burnouts. The dramatic, crisply paced narrative rests on a foundation of pathbreaking archival research and deep erudition. Essential reading for anyone interested in the worlds of information and imperial knowledge in Russia, China, or Europe. -- Matthew Mosca, author of <i>From Frontier Policy to Foreign Policy: The Question of India and the Transformation of Geopolitics in Qing China</i>

Gregory Afinogenov is Assistant Professor of Imperial Russian History at Georgetown University and Associate Editor at Kritika, the leading journal of Russian and Eurasian history. His essays and reviews have appeared in The Nation, London Review of Books, and n+1.