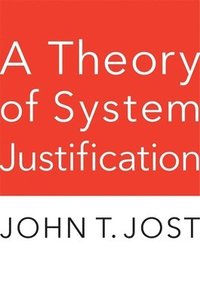 A Theory of System Justification

av John T Jost
Inbunden Engelska, 2020-06-15
369
Bevaka
Spara som favorit
Ännu ej utkommen – klicka "Bevaka" för att få ett mejl så fort boken boken går att köpa.
A leading psychologist explains why nearly all of us-including many of those who are persecuted and powerless-so often defend the social systems that cause misery and injustice. Why do we so often defend the very social systems that are responsible for injustice and exploitation? In A Theory of System Justification, John Jost argues that we are motivated to defend the status quo because doing so serves fundamental psychological needs for certainty, security, and social acceptance. We want to feel good not only about ourselves and the groups to which we belong, but also about the overarching social structure in which we live, even when it hurts others and ourselves. Jost lays out the wide range of evidence for his groundbreaking theory and examines its implications for our communities and our democracy. Drawing on twenty-five years of research, he provides an accessible account of system justification theory and its insights. System justification helps to explain deep contradictions, including the feeling among some women that they don't deserve the same salaries as men and the tendency of some poor people to vote for policies that increase economic inequality. The theory illuminates the most pressing social and political issues of our time-why has it been so hard to combat anthropogenic climate change?-as well as some of the most intimate-why do some black children prefer white dolls to black ones and why do some people stay in bad relationships? Jost's theory has far-reaching implications, and he offers numerous insights that political activists and social justice advocates can use to promote change.
Visa hela texten

Why do some in the working class vote against their economic interests? Why do some women support Trump? In this long-awaited volume, summarizing 25 years of work, Jost explains why some members of subordinate groups adopt and defend positions objectively at odds with their best interests. A model of social science research, A Theory of System Justification brings the theoretical and empirical rigor of the academy to bear on real-world issues. For those seeking a better grasp of the times in which we live, Jost's book is appointment reading.--Christopher S. Parker, author of Change They Can't Believe In System justification theory is one of social and psychological science's most audacious attempts to address scientifically a problem at the heart of philosophy: the problem of ideology. Why do we so often accept the structural conditions into which we are born, conditions that make life less just for us and those around us? In this book, the culmination of decades of research, John Jost, its pioneer, summarizes a quarter-century of its discoveries and challenges. It is an essential resource.--Jason Stanley, author of How Fascism Works A definitive synthesis of nearly three decades of pathbreaking research on the stubborn human tendency to embrace and defend oppressive systems. In prose that is both erudite and compelling, Jost reveals the insidious role of human psychology in producing and maintaining our most vexing social injustices, from economic inequality and sexual harassment to racial hierarchies and climate change. A Theory of System Justification will be a game-changer for lawyers, policymakers, activists, organizers, and anyone seeking to unearth the deeply rooted sources of our most profound social problems. In short, I can think of no more timely or valuable book.--Jon Hanson, Harvard Law School

John T. Jost is Professor of Psychology, Politics, and Data Science and Codirector of the Center for Social and Political Behavior at New York University. His research has earned numerous prizes, including the Morton Deutsch Award for Distinguished Scholarly and Practical Contributions to Social Justice from Columbia University.