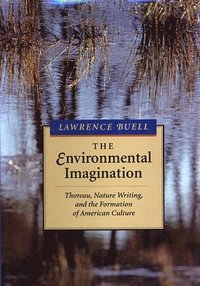 Thoreau, Nature Writing, and the Formation of American Culture

av Lawrence Buell
Häftad Engelska, 1996-08-01
359
Köp
Spara som favorit
Skickas inom 7-10 vardagar.
Fri frakt inom Sverige för privatpersoner.
With the environmental crisis comes a crisis of the imagination, a need to find new ways to understand nature and humanity's relation to it. This is the challenge Lawrence Buell takes up in The Environmental Imagination, the most ambitious study to date of how literature represents the natural environment. With Thoreau's Walden as a touchstone, Buell gives us a far-reaching account of environmental perception, the place of nature in the history of western thought, and the consequences for literary scholarship of attempting to imagine a more "ecocentric" way of being. In doing so, he provides a major new understanding of Thoreau's achievement and, at the same time, a profound rethinking of our literary and cultural reflections on nature. The green tradition in American writing commands Buell's special attention, particularly environmental nonfiction from colonial times to the present. In works by writers from Crevecoeur to Wendell Berry, John Muir to Aldo Leopold, Rachel Carson to Leslie Silko, Mary Austin to Edward Abbey, he examines enduring environmental themes such as the dream of relinquishment, the personification of the nonhuman, an attentiveness to environmental cycles, a devotion to place, and a prophetic awareness of possible ecocatastrophe. At the center of this study we find an image of Walden as a quest for greater environmental awareness, an impetus and guide for Buell as he develops a new vision of environmental writing and seeks a new way of conceiving the relation between human imagination and environmental actuality in the age of industrialization. Intricate and challenging in its arguments, yet engagingly and elegantly written, The Environmental Imagination is a major work of scholarship, one that establishes a new basis for reading American nature writing.
Visa hela texten

Literature generally defines itself as that realm of higher culture freed from both the sloppy nostalgia of nature lovers and the fact-bound objectivity of science. The resulting paradox gives Lawrence Buell his subject: nature writing survives in American literary and cultural studies as an 'enclave canon,' widely ignored even as the idea of nature is acknowledged to be formative to American culture and central to at least one canonical writer, Henry David Thoreau. In this fine book, Buell uses Thoreau's position at the crux of this paradox to argue for the return of nature to literary criticism and theory...Buell's excellent book is essential reading that for years to come will provide a central point of reference in discussions of Thoreau, environmental writing, and realist aesthetics. -- Laura Dassow Walls Isis The Environmental Imagination has become a standard work on the subject, and a pioneering example of what is being called 'ecocriticism.' -- Jay Parini New York Times Magazine [A] remarkable book...Building upon and brilliantly extending the new ecocriticism, Buell has made the most of Thoreau as cultural icon as well as major literary and intellectual figure, in the process raising the stakes and broadening the responsibilities of Thoreau scholarship and criticism. -- William Rossi ESQ: A Journal of the American Renaissance Lawrence Buell has undertaken a heroic task: to reorient the understanding of American literature and culture towards 'ecocentrism'; that is, to place the environment (and not simply humans within the environment) at the center of American literary studies. Further, its concern for 'the literal environment as opposed to the environment as a cultural symbol,' The Environmental Imagination is a respectful effort to supplement if not displace Leo Marx's The Machine in the Garden in American studies. Buell carries out his tasks largely by examining the implications of Walden on literature and environmental consciousness in the United States...That The Environmental Imagination can be deciphered by a lay reader is a tribute to a thesis that is both comprehensible and worth learning about. -- Charles A. Miller New England Quarterly A groundbreaking study...It is at once comprehensive, the bibliography alone comprising almost 140 pages of detailed notes; urgent, pressing upon our own imagination the real consequences of literary conventions of representing nature; and controversial, insightfully critiquing various cherished cows of contemporary literary theory...The Environmental Imagination is sure to be a standard reference for scholars of both Thoreau and the tradition of American nature writing. -- Robert Anderson Growth and Change Lawrence Buell's The Environmental Imagination is among the first ambitious and comprehensive attempts to define ecocriticism and establish its central issues and the mainstream of its tradition--at least, for Buell, in America. In that respect, it resembles some of the seminal works in women's studies, as a book that both argues for the legitimacy of its subject and reveals how it has a history, a solid tradition, that parallels the ones long-since established in the mainstream genres...The Environmental Imagination...will play a central role in establishing literary ecocriticim as a major field and will assume a place as one of that field's canonical texts...Its argument will rightly be acknowledged in all serious treatments of American nature writing from this point forward. -- Frederick W. Shilstone South Carolina Review