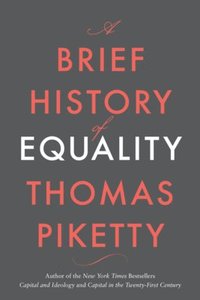 A Brief History of Equality

av Thomas Piketty
Inbunden Engelska, 2022-04-19
291
Köp
Spara som favorit
Kan tyvärr inte levereras innan julafton.
Finns även som
Visa alla 2 format & utgåvor
A New York Times Book Review Editors' Choice "An opportunity for readers to see Piketty bring his larger argument about the origins of inequality and his program for fighting it into high relief." -Nicholas Lemann, New York Times The world's leading economist of inequality presents a short but sweeping and surprisingly optimistic history of human progress toward equality despite crises, disasters, and backsliding. A perfect introduction to the ideas developed in his monumental earlier books. It's easy to be pessimistic about inequality. We know it has increased dramatically in many parts of the world over the past two generations. No one has done more to reveal the problem than Thomas Piketty. Now, in this surprising and powerful new work, Piketty reminds us that the grand sweep of history gives us reasons to be optimistic. Over the centuries, he shows, we have been moving toward greater equality. Piketty guides us with elegance and concision through the great movements that have made the modern world for better and worse: the growth of capitalism, revolutions, imperialism, slavery, wars, and the building of the welfare state. It's a history of violence and social struggle, punctuated by regression and disaster. But through it all, Piketty shows, human societies have moved fitfully toward a more just distribution of income and assets, a reduction of racial and gender inequalities, and greater access to health care, education, and the rights of citizenship. Our rough march forward is political and ideological, an endless fight against injustice. To keep moving, Piketty argues, we need to learn and commit to what works, to institutional, legal, social, fiscal, and educational systems that can make equality a lasting reality. At the same time, we need to resist historical amnesia and the temptations of cultural separatism and intellectual compartmentalization. At stake is the quality of life for billions of people. We know we can do better, Piketty concludes. The past shows us how. The future is up to us.
Visa hela texten

There is no historian of global inequality more impactful today than Piketty. His latest book is a succinct synthesis of the important lessons of his work to date-a valuable resource for all of us trying to build an economy that is driven by value creation for all and not value extraction for the few. -- Mariana Mazzucato, author of <i>Mission Economy: A Moonshot Guide to Changing Capitalism</i> Thomas Piketty helped put inequality at the center of political debate. Now, he offers an ambitious program for addressing it. The revitalized democratic socialism he proposes goes beyond the welfare state by calling for guaranteed employment, inheritance for all, power-sharing in corporations, and new rules for globalization. This is political economy on a grand scale, a starting point for debate about the future of progressive politics. -- Michael J. Sandel, author of <i>The Tyranny of Merit: Can We Find the Common Good?</i> [Piketty] argues that we're on a trajectory of greater, not less, equality and lays out his prescriptions for remedying our current corrosive wealth disparities. -- David Marchese * New York Times Magazine * An opportunity for readers to see Piketty bring his larger argument about the origins of inequality and his program for fighting it into high relief. -- Nicholas Lemann * New York Times * A sustained argument for why we should be optimistic about human progress...An engaged and clearheaded socialist thinker, Piketty sets forth...one of the most comprehensive and comprehensible social democratic programs available anywhere...He has laid out a plan that is smart, thoughtful, and motivated by admirable political convictions. -- Gary Gerstle * Washington Post * An activist's history, part reckoning with the past and part manifesto for the future, designed to bolster the courage of those who would continue the forward march. It is an admirable undertaking...Piketty mounts an impassioned plea for a renewed and retooled commitment to equality in its various forms, laying out an ambitious blueprint for a new kind of democratic, self-managing and decentralized socialism, not least as a counter to the authoritarian, state-socialist model of China. -- Darrin M. McMahon * Literary Review * A Brief History of Equality is a route into Piketty's arguments in his earlier books, with their luxuriantly extensive data and historical detail. Anybody who has not been able to face those tomes...should read this one. -- Diane Coyle * Financial Times * Peak Piketty...He possesses the rarest of abilities to analyze staggering quantities of information and offer original insights into the structures that underpin our economies...At a time when the concept of objective truth is under assault and when the nuance of argument can be drowned out by the shouting of slogans, there is something glorious about the scale of the work of Thomas Piketty. His arguments are vast in their detail, ever ambitious and always hopeful. This elegant and (by his standards) short book will allow any reader to understand the glory. -- Paschal Donohoe * Irish Times * An analysis that might just provide a fresh opportunity for social hope...Piketty has undeniably identified clues about how to achieve a more egalitarian world. -- Richard Horton * The Lancet * Tidier and more lucid...Piketty is guardedly optimistic about the prospects for future social progress. -- Timothy Noah * New Republic * Marked by Piketty's trademark lucidity, impressive multidisciplinary scholarship, and provocative progressivism, this is a vital introduction to his ideas. * Publishers Weekly (starred review) * A Brief History of Equality is a literally exceptional book. Thomas Piketty documents the economic growth and moral progress humanity has experienced over the past three centuries and draws a new inspiration from this history. Others who emphasize progress succumb to flatfooted views of well-being, technocratic fear of politics, and quietism about justice. B