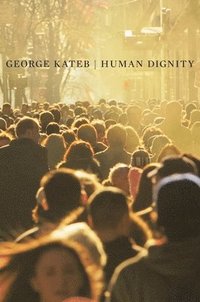 av George Kateb
Häftad Engelska, 2014-03-14
239
Köp
Spara som favorit
Skickas inom 5-8 vardagar.
Fri frakt inom Sverige för privatpersoner.
We often speak of the dignity owed to a person. And dignity is a word that regularly appears in political speeches. Charters are promulgated in its name, and appeals to it are made when people all over the world struggle to achieve their rights. But what exactly is dignity? When one person physically assaults another, we feel the wrong demands immediate condemnation and legal sanction. Whereas when one person humiliates or thoughtlessly makes use of another, we recognize the wrong and hope for a remedy, but the social response is less clear. The injury itself may be hard to quantify. Given our concern with human dignity, it is odd that it has received comparatively little scrutiny. Here, George Kateb asks what human dignity is and why it matters for the claim to rights. He proposes that dignity is an "existential" value that pertains to the identity of a person as a human being. To injure or even to try to efface someone's dignity is to treat that person as not human or less than human--as a thing or instrument or subhuman creature. Kateb does not limit the notion of dignity to individuals but extends it to the human species. The dignity of the human species rests on our uniqueness among all other species. In the book's concluding section, he argues that despite the ravages we have inflicted on it, nature would be worse off without humanity. The supremely fitting task of humanity can be seen as a "stewardship" of nature. This secular defense of human dignity--the first book-length attempt of its kind--crowns the career of a distinguished political thinker.
Visa hela texten

Kateb, like J. S. Mill, asks what objects of secular faith may candidly be used to supplant religious belief. Humanity is the answer he suggests--but humanity regarded not as the collective hero of progress or enlightenment, but as the most interesting part of nature for better and for worse: the part that holds up a mirror to the rest, even though the rest cannot recognize itself in the mirror. This is a disturbing, adventurous, and original-minded work.--David Bromwich, Yale University [Kateb] is the last--that is, the first and only--thoroughgoing Emersonian in American political thought.--Cornel West, Princeton University In this lucid and highly readable 'defense of human dignity' and rights, Kateb explicitly avoids the use of theological insights, preferring the autonomous individual and human reason as his guides... Kateb's critique of many prominent thinkers, including Peter Singer and J.S. Mill, and his provocative application of a theory of human dignity and rights to contemporary politics, are significant accomplishments.-- (08/01/2011) [A] powerful and ambitious book. [Kateb] provides a sterling example of one of the most challenging of genres, the philosophic essay. He writes not just for other scholars but for anyone who loves to think. I won't mislead you by pretending that Human Dignity is easy and pleasant. It is demanding and pleasant, the pleasures being those of an argument that illuminates an important subject... No brief review could do justice to its bold amplitude, its intriguing twists, its problems and provocations.-- (03/11/2011) [Kateb] suggests that the idea of dignity is essential to the idea of human rights. By this he means that human rights are in fact derived from human dignity, which is not some spurious moral precept but an integral part of the human condition. For Kateb, dignity is not, at root, a moral phenomenon but an existential one... It is refreshing to read a work of philosophy that tries to restore some pride to our rather jaded species... Human Dignity...attempts to give human beings their due, not in any spirit of self-congratulation but so that we may build a better life for all.-- (03/26/2011)