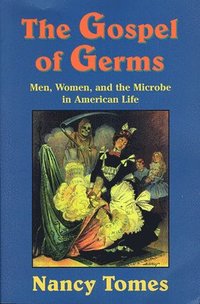 The Gospel of Germs

Men, Women, and the Microbe in American Life

av Nancy Tomes
Häftad Engelska, 1999-09-01
449
Köp
Spara som favorit
Skickas inom 7-10 vardagar.
Gratis frakt inom Sverige över 159 kr för privatpersoner.
Finns även som
Visa alla 1 format & utgåvor
AIDS. Ebola. "Killer microbes." All around us the alarms are going off, warning of the danger of new, deadly diseases. And yet, as Nancy Tomes reminds us in her absorbing book, this is really nothing new. A remarkable work of medical and cultural history, The Gospel of Germs takes us back to the first great "germ panic" in American history, which peaked in the early 1900s, to explore the origins of our modern disease consciousness. Little more than a hundred years ago, ordinary Americans had no idea that many deadly ailments were the work of microorganisms, let alone that their own behavior spread such diseases. The Gospel of Germs shows how the revolutionary findings of late nineteenth-century bacteriology made their way from the laboratory to the lavatory and kitchen, with public health reformers spreading the word and women taking up the battle on the domestic front. Drawing on a wealth of advice books, patent applications, advertisements, and oral histories, Tomes traces the new awareness of the microbe as it radiated outward from middle-class homes into the world of American business and crossed the lines of class, gender, ethnicity, and race. Just as we take some of the weapons in this germ war for granted--fixtures as familiar as the white porcelain toilet, the window screen, the refrigerator, and the vacuum cleaner--so we rarely think of the drastic measures deployed against disease in the dangerous old days before antibiotics. But, as Tomes notes, many of the hygiene rules first popularized in those days remain the foundation of infectious disease control today. Her work offers a timely look into the history of our long-standing obsession with germs, its impact on twentieth-century culture and society, and its troubling new relevance to our own lives.
Visa hela texten

[A] masterly study of how germs infiltrated the American imagination...The strength of Tomes's book...lies in the subtle and convincing way in which it traces the transformations in everyday beliefs, experiences, and habits produced by medicine's migration from the laboratory to the lavatory. Skillfully researched and skillfully written, it charts the 'revolution in personal hygiene' that helped to create a safer environment even as it produced new prejudices about purity and danger. -- Roy Porter New Republic The book depicts mass culture not simply as a medium through which doctors' discoveries were communicated to a passive populace but as the site of an active dialogue between science and society...provides a valuable starting place for general historians of modern America to explore the relation between mass culture and medical science and likely will be the book to assign on health and medicine in undergraduate courses on twentieth-century American cultural history. -- Martin S. Pernick American Historical Review This account...nicely weaves together many strands of social history from the decades on either side of the start of the 20th century...Individual and institutional beliefs about where microbial danger resided and what could be done about it evolved with the insights of biology, the advances of medicine and the epidemiology of prevalent diseases. The evolution continues, as the author points out in an especially interesting epilogue, as public health officials today find themselves going up against lessons of the past. -- David Brown Washington Post Book World Tomes's book is a fine example of the new social history of biomedical science, full of fascinating detail, elegantly written and cogently argued. In exposing the values and practices of our ancestors, it has much to teach us about ourselves. -- W.F. Bynum Nature This book will make you smile as you think about the personal habits of friends and families and it will stir up anger as you consider the ways in which the so-called Reagan Revolution of the 1980s endowed us with a decaying public health infrastructure...As Nancy Tomes explores the vast social changes wrought by the germ theory--the idea that some diseases are caused by living organisms--she is careful to note its complexities. Acknowledging the very real accomplishments of Progressive Era reformers, such as pasteurization of milk and inspection of meat, she also demonstrates that 'their achievements were limited by deeply ingrained patterns of economic injustice and racial prejudice.' And writing of the legacy of the germ theory, she poignantly notes that the lessons about contagion that Americans learned so well in the early decades of the twentieth century would come back to haunt Ryan White and others with HIV...It is tempting to think of [author>Tomes's] book...as a sermon. As such, it has a simple but eloquent conclusion:...We should learn from the past: we are not going to protect our health with hand sanitizers, home tap water filters, vitamins and, for those who can afford it, private health insurance. We need a public, not a private, health movement in the twenty-first century, just as we did in the twentieth. -- Janet Golden Women's Review of Books [The Gospel of Germs] is an exciting and vivid story based on careful analysis of oral histories, advertisements, patent applications, books of advice, and other sources. Tomes tells how [the belief that microbes cause disease] transformed the thinking of ordinary Americans and how it often also transformed their domestic arrangements. Although similar changes occurred in other Western countries, Tomes presents evidence that the American experience was distinctive because of the influence of advertising and the special role of crusades against disease in American political culture...This is a fascinating story and a fascinating book. It is written in a scholarly manner with ample references for the use of the historian and the physician,

Nancy Tomes is Professor of History, State University of New York at Stony Brook, and the author of The Art of Asylum-Keeping: Thomas Story Kirkbride and the Origins of American Psychiatry.