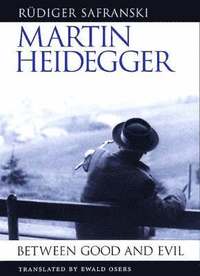 Between Good and Evil

av Rudiger Safranski
Häftad Engelska, 1999-10-01
319
Köp
Spara som favorit
Skickas inom 10-15 vardagar.
Fri frakt inom Sverige för privatpersoner.
Kan tyvärr inte längre levereras innan jul.
This is a biography of Martin Heidegger chronicling his ideas, with their debt to Heraclitus, Plato, and Kant, and his personal commitments and betrayals. The author combines accounts of the philosophy with the details of the loves and lapses that tripped this intellectual.
Visa hela texten

This biography of Martin Heidegger is an impressive achievement, and English-speaking readers are fortunate that it is now available to them..."Martin Heidegger" is the first comprehensive biography of one of the most influential philosophers of the twentieth century. It offers a detailed view of Heidegger's intellectual development provided by no previous book, and it gives new information on his involvement with the Nazis. Given the importance of Heidegger's thought for many celebrated left-wing thinkers, including Jacques Derrida and Michel Foucault, Safranski's careful consideration of the relation between Heidegger's right-wing politics and his thought can help readers struggle with the much-debated question of whether the contemporary leftists of the postmodern movement are really cultural reactionaries in disguise...Safranski's biography is both the most authoritative and the most approachable of the recent Heidegger books. -- Carl L. Bankston III "Magill's Literary Annual"

Rudiger Safranski studies German, philosophy, and history in Frankfurt and Berlin. He has worked in adult education and was copublisher of the magazine Berlin Hefte. He is also the author of a widely acclaimed biography of E.T.A. Hoffman. Ewald Osers is the distinguished translator of numerous works of poetry, fiction, and nonfiction from German and Czech, including the correspondence of Richard Strauss and Hugo von Hofmannsthal.

Preface: A Master from Germany Chronology Abbreviations Translator's Note Childhood and School Idealism and Materialism: German Philosophy in the Nineteenth Century Career Planning and Career Problems The Outbreak of World War I: Habilitation, War Service, Marriage The Triumph of Phenomenology: Husserl and Heidegger, Father and Son Revolution in Germany and the Question of Being Parting with Catholicism and Studying the Laws of Free Fall while Falling Marburg University and Hannah Arendt, the Great Passion Being and Time: What Being? What Meaning? The Mood of the Time: Waiting for the Great Day A Secret Principal Work: The Metaphysics Lectures of 1929-30 Balance Sheets at the End of the Republic The National Socialist Revolution and Collective Breakout from the Cave Is Heidegger Anti-Semitic? Heidegger's Struggle for the Purity of the Movement Departure from the Political Scene The Age of Ideology and Total Mobilization: Heidegger Beats a Retreat The Philosophical Diary and Philosophical Rosary Heidegger under Surveillance Heidegger Faces the Denazification Committee: Barred from University Teaching What Do We Do When We Think? Martin Heidegger, Hannah Arendt, and Karl Jaspers after the War Heidegger's Other Public Adorno and Heidegger: From the Jargon of Authenticity to the Authentic Jargon of the 1960s Sunset of Life Notes Works Cited Further Reading Index