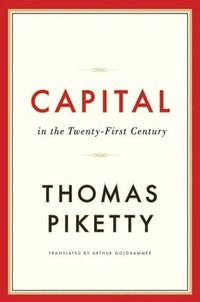 Capital in the Twenty-First Century

av Thomas Piketty
(33 röster)  |  Läs 7 recensioner
Inbunden Engelska, 2014-04-15
387
Köp
Spara som favorit
Finns även som
Visa alla 3 format & utgåvor
A New York Times #1 Bestseller An Amazon #1 Bestseller A Wall Street Journal #1 Bestseller A USA Today Bestseller A Sunday Times Bestseller A Guardian Best Book of the 21st Century Winner of the Financial Times and McKinsey Business Book of the Year Award Winner of the British Academy Medal Finalist, National Book Critics Circle Award What are the grand dynamics that drive the accumulation and distribution of capital? Questions about the long-term evolution of inequality, the concentration of wealth, and the prospects for economic growth lie at the heart of political economy. But satisfactory answers have been hard to find for lack of adequate data and clear guiding theories. In Capital in the Twenty-First Century, Thomas Piketty analyzes a unique collection of data from twenty countries, ranging as far back as the eighteenth century, to uncover key economic and social patterns. His findings will transform debate and set the agenda for the next generation of thought about wealth and inequality. Piketty shows that modern economic growth and the diffusion of knowledge have allowed us to avoid inequalities on the apocalyptic scale predicted by Karl Marx. But we have not modified the deep structures of capital and inequality as much as we thought in the optimistic decades following World War II. The main driver of inequality-the tendency of returns on capital to exceed the rate of economic growth-today threatens to generate extreme inequalities that stir discontent and undermine democratic values. But economic trends are not acts of God. Political action has curbed dangerous inequalities in the past, Piketty says, and may do so again. A work of extraordinary ambition, originality, and rigor, Capital in the Twenty-First Century reorients our understanding of economic history and confronts us with sobering lessons for today.
Visa hela texten

It seems safe to say that Capital in the Twenty-First Century, the magnum opus of the French economist Thomas Piketty, will be the most important economics book of the year-and maybe of the decade. Piketty, arguably the world's leading expert on income and wealth inequality, does more than document the growing concentration of income in the hands of a small economic elite. He also makes a powerful case that we're on the way back to 'patrimonial capitalism,' in which the commanding heights of the economy are dominated not just by wealth, but also by inherited wealth, in which birth matters more than effort and talent. -- Paul Krugman * New York Times * A sweeping account of rising inequality...Eventually, Piketty says, we could see the reemergence of a world familiar to nineteenth-century Europeans; he cites the novels of Austen and Balzac. In this 'patrimonial society,' a small group of wealthy rentiers lives lavishly on the fruits of its inherited wealth, and the rest struggle to keep up...The proper role of public intellectuals is to question accepted dogmas, conceive of new methods of analysis, and expand the terms of public debate. Capital in the Twenty-First Century does all these things...Piketty has written a book that nobody interested in a defining issue of our era can afford to ignore. -- John Cassidy * New Yorker * An extraordinary sweep of history backed by remarkably detailed data and analysis...Piketty's economic analysis and historical proofs are breathtaking. -- Robert B. Reich * The Guardian * Piketty's treatment of inequality is perfectly matched to its moment. Like [Paul] Kennedy a generation ago, Piketty has emerged as a rock star of the policy-intellectual world...But make no mistake, his work richly deserves all the attention it is receiving...Piketty, in collaboration with others, has spent more than a decade mining huge quantities of data spanning centuries and many countries to document, absolutely conclusively, that the share of income and wealth going to those at the very top-the top 1 percent, .1 percent, and .01 percent of the population-has risen sharply over the last generation, marking a return to a pattern that prevailed before World War I...Even if none of Piketty's theories stands up, the establishment of this fact has transformed political discourse and is a Nobel Prize-worthy contribution. Piketty provides an elegant framework for making sense of a complex reality. His theorizing is bold and simple and hugely important if correct. In every area of thought, progress comes from simple abstract paradigms that guide later thinking, such as Darwin's idea of evolution, Ricardo's notion of comparative advantage, or Keynes's conception of aggregate demand. Whether or not his idea ultimately proves out, Piketty makes a major contribution by putting forth a theory of natural economic evolution under capitalism... Piketty writes in the epic philosophical mode of Keynes, Marx, or Adam Smith...By focusing attention on what has happened to a fortunate few among us, and by opening up for debate issues around the long-run functioning of our market system, Capital in the Twenty-First Century has made a profoundly important contribution. -- Lawrence H. Summers * Democracy * It is easy to overlook the achievement of Thomas Piketty's new bestseller, Capital in the Twenty-First Century, as a work of economic history. Debates about the book have largely focused on inequality. But on any given page, there is data about the total level of private capital and the percentage of income paid out to labor in England from the 1700s onward, something that would have been impossible for early researchers...Capital reflects decades of work in collecting national income data across centuries, countries, and class, done in partnership with academics across the globe. But beyond its remarkably rich and instructive history, the book's deep and novel understanding of inequality in the economy has drawn well-deserved attention..