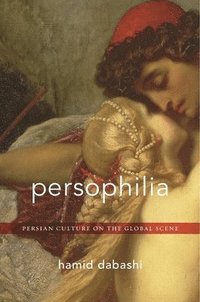 Persian Culture on the Global Scene

av Hamid Dabashi
Inbunden Engelska, 2015-10-09
339
Köp
Spara som favorit
Skickas inom 7-10 vardagar.
Fri frakt inom Sverige för privatpersoner.
Finns även som
Visa alla 1 format & utgåvor
From the Biblical period and Classical Antiquity to the rise of the Renaissance and the Enlightenment, aspects of Persian culture have been integral to European history. A diverse constellation of European artists, poets, and thinkers have looked to Persia for inspiration, finding there a rich cultural counterpoint and frame of reference. Interest in all things Persian was no passing fancy but an enduring fascination that has shaped not just Western views but the self-image of Iranians up to the present day. Persophilia maps the changing geography of connections between Persia and the West over the centuries and shows that traffic in ideas about Persia and Persians did not travel on a one-way street. How did Iranians respond when they saw themselves reflected in Western mirrors? Expanding on Jurgen Habermas's theory of the public sphere, and overcoming the limits of Edward Said, Hamid Dabashi answers this critical question by tracing the formation of a civic discursive space in Iran, seeing it as a prime example of a modern nation-state emerging from an ancient civilization in the context of European colonialism. The modern Iranian public sphere, Dabashi argues, cannot be understood apart from this dynamic interaction. Persophilia takes into its purview works as varied as Xenophon's Cyropaedia and Nietzsche's Thus Spoke Zarathustra, Handel's Xerxes and Puccini's Turandot, and Gauguin and Matisse's fascination with Persian art. The result is a provocative reading of world history that dismantles normative historiography and alters our understanding of postcolonial nations.
Visa hela texten

Hamid Dabashi tells an elegant and startling story about the significance of Persian culture in Western society, and how Western ideas about Persian culture shaped modern Iran's notions of its antiquity and literary history.--Firoozeh Kashani-Sabet, University of Pennsylvania A lively and erudite account of Persophilia...Whenever Dabashi discusses particular writers, Iranian or Western, his enthusiasm brims over; his love for literature, whether in Persian or English, German or French, shines through and animates his prose...His astute capsule descriptions of 19th- and 20th-century Iranian writers, most of whom remain unknown in the West, will come as both provocative and enlightening to even the most jaded Persophile.-- (05/01/2016) Hamid Dabashi's scholarly investigation into Persophilia--the attraction that Iran's literary humanism held for giants of European culture including Mozart, Goethe, and Nietzsche--turns simplistic views of 'Orientalism' upside down. His penetrating account of a global conversation lasting centuries forces us to rethink tired old clich s about European cultural hegemony.--Malise Ruthven, author of Islam in the World