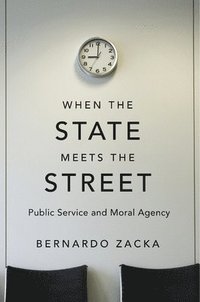 When the State Meets the Street

av Bernardo Zacka
Inbunden Engelska, 2017-09-18
259
Köp
Spara som favorit
When the State Meets the Street probes the complex moral lives of street-level bureaucrats: the frontline social and welfare workers, police officers, and educators who represent government's human face to ordinary citizens. Too often dismissed as soulless operators, these workers wield a significant margin of discretion and make decisions that profoundly affect people's lives. Combining insights from political theory with his own ethnographic fieldwork as a receptionist in an urban antipoverty agency, Bernardo Zacka shows us firsthand the predicament in which these public servants are entangled. Public policy consists of rules and regulations, but its implementation depends on how street-level bureaucrats interpret them and exercise discretionary judgment. These workers are expected to act as sensible moral agents in a working environment that is notoriously challenging and that conspires against them. Confronted by the pressures of everyday work, they often and unknowingly settle for one of several reductive conceptions of their responsibilities, each by itself pathological in the face of a complex, messy reality. Zacka examines the factors that contribute to this erosion of moral sensibility and what it takes to remain a balanced moral agent in such difficult conditions. Zacka's revisionary portrait reveals bureaucratic life as more fluid and ethically fraught than most citizens realize. It invites us to approach the political theory of the democratic state from the bottom-up, thinking not just about what policies the state should adopt but also about how it ought to interact with citizens when implementing these policies.
Visa hela texten

"When the State Meets the Street reads as one might imagine a collaboration between Bernard Williams, Richard Sennett, and James Scott could turn out. If there can be such a thing as an instant classic, this book is one."-David Owen, University of Southampton "In this refreshing study, Zacka finds in the commonplace decision-making of street level bureaucrats an implicit but coherent moral structure. When citizens experience the state through street-level encounters, the author shows, they are subject to moral reasoning no less than when elected officials expand or contract social welfare policies, or bring a nation to war."-Michael Lipsky, author of Street-Level Bureaucracy: Dilemmas of the Individual in Public Services "Beautifully written, tightly argued, and totally original."-Michael Piore, Massachusetts Institute of Technology "In his groundbreaking book When the State Meets the Street: Public Service and Moral Agency, Bernardo Zacka illustrates a new methodological approach for political theory, opens up avenues of normative research on the neglected topic of bureaucracy and bureaucrats and overturns an intellectually dubious, but nonetheless dominant, model of the state...Zacka's discussion is subtle and thoughtful and opens many avenues for political and moral theorists to explore."-Alex Sager, LSE Review of Books "This book...not only offers a valuable contribution to the street-level bureaucracy literature, but is also an essential read for political theorists interested in a bottom-up account of the state."-Nadine Raaphorst, Acta Politica "Zacka's application of normative theory to state-level bureaucrats and his efforts at injecting ethnographically informed descriptive evidence into political theory are to be applauded and should represent a vanguard in political theory."-Timothy Werner, Administrative Science Quarterly "An exemplary and exquisitely written book from which sociologists have much to learn."-Gretchen Purser, American Journal of Sociology "Drawing from first-hand observations adds an anthropological sensitivity to the book, in the process showing that political philosophers have much to gain from venturing into the real world. The result is an original book that most democratic theorists should read, especially those interested in moral reasoning in everyday life."-Jan Pieter Beetz, Constellations "Zacka persuasively argues that street-level bureaucrats are, in fact, moral agents 'vested with a considerable margin of discretion.' More importantly, he makes a compelling case for the normative desirability of that discretionary power...The book draws on a broad array of literatures, from other qualitative work on bureaucracies to psychology, sociology, and normative political philosophy, providing Zacka with an astounding and productive array of interlocutors...Zacka's remarkable book opens up many intriguing questions and will hopefully be one of many future studies that combine the virtues of an ethnographic approach and normative political theory."-Yuna Blajer de la Garza, Contemporary Political Theory "Drawing eclectically from a breathtakingly wide range of sources and disciplinary approaches to the study of politics, policy, and organizations, Zacka develops a robust and analytically rigorous framework for understanding street-level work that builds on, and ultimately surpasses, Lipsky's original treatment in several respects."-Chad Broughton, Contemporary Sociology "It is wide-ranging in its theoretical breadth, evocative in its traversing of theory and practice, and convincing in its marshalling of argument. Above all, it is stylish. It makes bureaucracy-largely neglected in contemporary political theory as technical, apolitical, mundane-intellectually sexy...Brilliant."-John Boswell, Critical Policy Studies "When the State Meets the Street offers an innovative take on the conditi